CHAMPION – For a full calendar year, the Escanaba girls golf team had a singular goal, and some lofty expectations.

Houghton's Division 1 title streak had reached five years running, and the Gremlins were again led by sophomore Kaaren Liston, a formidable golfer who was medalist at last year's MHSAA U.P. Final at Pine Grove. Houghton shot a 416 that day, far higher than what the talented Gremlins had been averaging during the season, but still 22 strokes better than third place Escanaba.

That was the mountain the Eskymos faced as they went into last summer's offseason. But from that point on, it was all business.

Escanaba improved by leaps and bounds across the board through hard work and focus this season. On Thursday it all paid off, as the Eskymos were crowned U.P. Division 1 champions at Wawonowin Golf Club, breaking up the Gremlins’ long run.

"I would like to know how many U.P.'s that (score) would have won in the last decade," remarked Eskymos coach Brian Robinette. “Probably all of them."

Escanaba was strong in returning talent at the beginning of the season, but it was the addition of freshman Paxton Johnson that put the Eskymos over the top. A quietly confident, focused and mentally strong golfer, Johnson's scores drew eyebrows from day one. She was medalist at her first meet of the season and continually improved as the short golf season went on.

On Thursday, Johnson turned in a balanced effort, free of double bogeys, and was medalist with an 86. She improved by three strokes from a multi-team meet at Wawonowin earlier this season. Yet, being the competitor she is, Johnson expressed her commitment to keep working.

"I improved by three strokes from the first time I played here, which I was pretty happy about," Johnson said. "I didn't have any doubles, but I still could have definitely played better. I still shot well enough though."

Playing in a foursome with Houghton's Liston, Menominee's Emma Hofer and Gladstone's Ashley Edwardsen, Johnson embraced the competition level. Her and Liston were all even through 17 holes, until the 18th when Liston triple bogeyed. Johnson escaped with a bogey and the title. Liston finished as runner-up with an 88, along with Ellie Hicks of Marquette.

"It definitely helps to be neck and neck with someone," said Johnson.

But the main philosophy the Escanaba girls subscribed to was not focusing on competition against other teams and players, but internal competition within each of them. 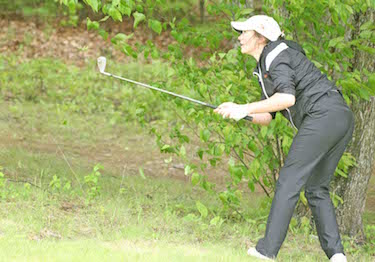 "I think they were all looking at this as, not playing against Houghton or Gladstone, but playing against the shot that golf is asking me to hit," said Robinette. "They really have embraced that concept, and that's what an intelligent golfer will do. When you take all that other fluff away, and all you can control is the shot in front of you. I'd say they effectively accomplished that today."

Houghton's runner-up team score of 389 would have been good for first on a lot of days. While Gremlins coach Corey Markham was pleased with his team's play, he could only tip his hat to the play of Escanaba.

"Our girls played very well today, like we expected. But they ran into a great Escanaba team," Markham said. "A 366 score is phenomenal. They just had a great day. You're not going to beat that score too often."

Escanaba's Megan Dagenais placed fourth with a 91, and teammate Kaitlin Cole tied for fifth with a 93 with Sydney Higgins of Marquette. Emily Hossele rounded out the Eskymos' top four with a 96, good for eighth overall.

After Escanaba and Houghton, there was a drop-off of 22 strokes to third place Marquette with 411. Calumet was fourth with 450 and Gladstone fifth with 454.

With Escanaba's mission accomplished and a job well done, Johnson has personal aims to continue to improve.

"It's going to be golf, all summer long," Johnson vowed.

And if the rest of the team improves, the Eskymos could be favored to repeat next season. Emily Hossele is the only top-five senior on the team.

PHOTOS: (Top) Escanaba’s Paxton Johnson watches her shot on the No. 2 fairway at Wawonowin Country Club. (Middle) Houghton's Kaaren Liston hits out of a tough lie on No. 2. (Photos by Keith Shelton.)