Winning the MHSAA Lower Peninsula Division 1 team championship was not a huge surprise for East Kentwood, which returned its top four players from the team that finished sixth last year.

In the process, White, who finished second as a freshman three years ago and sixth the past two years, captured the individual honors with back-to-back rounds of 73. Again, it was not a huge surprise.

However, facing a 51-foot putt on the 18th hole – the final hole of her high school career – White did not think about sinking it, but she did, wrapping up her career and both the team and individual championships at Bedford Valley Golf Course.

White also could not have known that she needed to make the putt to win the individual title and avoid a playoff with Jaclyn Facola of Monroe, who finished one stroke back. White’s two-day total of 146 also was two strokes ahead of Elayna Bowser of Dearborn and Lauren Ingle of Rochester Hills Stoney Creek.

“I was like, ‘Just put it close, two-putt par, easy 74,’ ” White said. “And then it’s halfway and starts turning toward the hole, and I think, ‘Just go in,’ and it goes in. I threw a fist-pump, and I didn’t even know what was going on. I just kind of celebrated because it went in. I wasn’t expecting it.

“It was awesome because the past couple of holes I was burning the edge or it stopped on the lip, so to get one to fall on the last hole was awesome.”

While the race for the individual title was close, East Kentwood made sure the competition for the team title wasn’t close. The Falcons held a 10-stroke lead after a team score of 324 on Friday, and Saturday it dropped to 319 for a two-day total of 643 – well ahead of runner-up Lake Orion at 665 and third-place Dearborn at 671.

“It’s really nice to see them deal with a 10-shot lead as well as they did,” first-year East Kentwood coach Andy Giarmo said. “They approached the day as being just another 18-hole tournament where everybody was starting at zero, and they really did a great job of staying patient and staying mature through the whole round.”

Nine of the 10 rounds played by the five East Kentwood girls were below 90, and each of the five had their score count at least once, something White said has been a trademark of the team all season.

“If someone is having a bad day, someone steps up,” White said. “That’s what I love about this team. We’re invincible as a team, but individually we’re ineffective.

“As a team, we’re just so much stronger.”

On Friday, it was Emma Millard and Janelle Quinn who stepped up for East Kentwood. Millard shot 80 on Friday and followed it with 83 for a 163 total.

“It feels pretty good,” Millard said. “I was just thinking of my team the whole time, and I wanted to come through for them and finish strong.”

Quinn, a sophomore who just took up the game of golf two years ago and was the team’s No. 5 player, had rounds of 86 and 89 for 175. Her 86 was one of the top four scores turned in Friday by the Falcons.

“Janelle has come through for us all year,” Giarmo said. “The great thing about this team is we’ve had people step up when we need to. For Janelle to show that level of maturity and confidence as a sophomore has been so impressive all year long.”

Junior co-captain Mackenzie Keenoy followed a disappointing first-round 85 with a 75 on Saturday, and credited her putting for the improvement.

“I did not play well Friday, and Emma stepped up,” Keenoy said. “I finally made some putts (Saturday). I needed it. Friday I went out and did not play to my game; I struggled all day, so I went in thinking I need to make some putts.

“My shots were not perfect – I was not hitting the ball great – and I needed to make some putts. It was great.”

Isabel Meier, another senior, had rounds of 93 and 88 for the Falcons, and her 88 counted toward the team total Saturday. 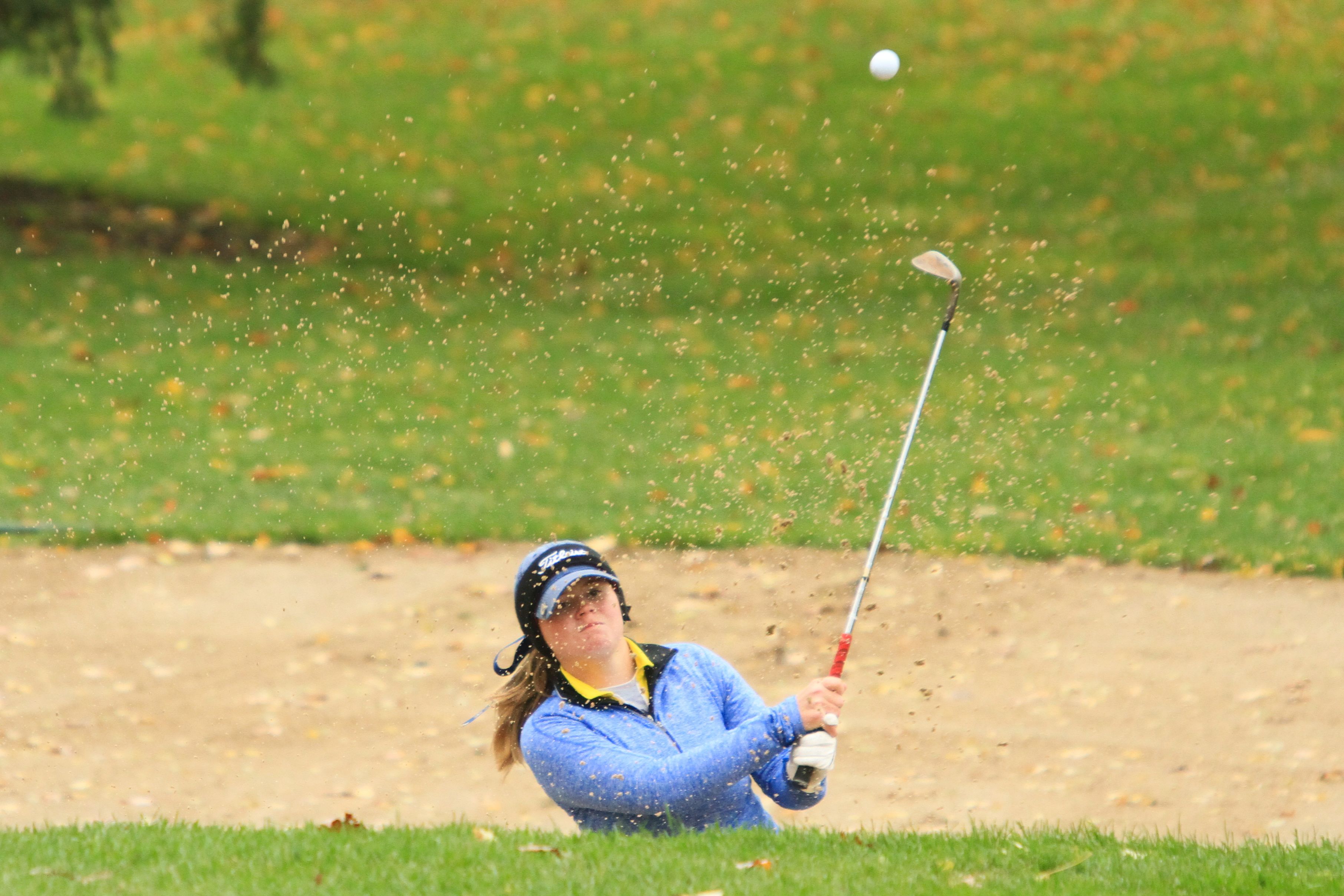 “We all worked really hard, and it was a team effort,” she said. “I’m not very pleased with how I played, but we all put a lot of effort into it. It’s great.

“I don’t think it will sink in for a couple of days. It’s really crazy. A lot of us have been on the same team for four years, and it’s weird to think that we really finally did it.”

Possibly the most interested spectator at Bedford Valley was Lindsey Boyle, who coached the team the previous three years before resigning, although she helped out the team at times this year.

“I worked with the girls since they were freshmen, and Sarah White especially,” Boyle said. “It’s a proud moment to see them come out on top.”

White is a long-hitter who plans to continue her golf career at Western Michigan University.

“She does everything well,” Giarmo said. “She hits the ball a long way off the tee and very straight, and she can make the big putt when she needs to, and that’s special – not a lot of people can do that.”

White was a little more colorful in describing the way she played Friday and Saturday.

“I just was killing my driver these past two days,” she said. “I’ve been outdriving everybody and putting myself in great opportunities to get birdies.”

White also said that winning the team title was a greater thrill than the individual championship.

“To win a golf tournament as a team is awesome,” White said. “It’s better than individually. I’d take it over individually any day. To win as a team, we all get to share it, and we’re all so excited.”

Sharing in success is probably one reason why White wanted to give credit to both her current and former coaches.

“The great thing is that Coach Boyle showed up; she’s the one who kind of brought us together as a team,” White said. “We definitely want to give it to her as well as Coach Giarmo.

“She’s the kind of coach who can make you laugh when you’re crying after a bad hole, but Coach Giarmo has his perks, too. He’s a great guy and a great coach. We wouldn’t have been here without both of them.”

The Falcons also recognized another coach, but not one of their own. Each East Kentwood player wore a ribbon in their hair to honor Grand Rapids South Christian girls golf coach Rob VanDyke, who was killed earlier this month when he was struck by a motorist while bicycling in Hudsonville.

“Our whole team made ribbons for him in his memory because he was a great guy,” White said. “His team went out and won regionals lights out, and that was awesome.”

“Awesome” might have been the word of the day for East Kentwood, which picked up its first MHSAA championship in girls golf.

“I’ve never wanted anything more in my entire life than to be where I am right now,” White said. “This exceeds anything. My mind is blown right now.

“I don’t think I’ve ever been more proud to be a Falcon than today. It’s awesome.”

While White and East Kentwood stole the show and the titles, junior Lucy Buzolitz of Grosse Pointe South provided a memorable moment on Friday when she scored a hole-in-one on the par-3 12th hole.

PHOTOS: (Top) East Kentwood’s Sara White celebrates a 51-foot putt on the 18th hole that secured for her the LP Division 1 individual title. (Middle) Grosse Pointe South’s Lucy Buzolitz fires a shot from the sand Saturday; on Friday, she scored a hole-in-one. (Click to see more from HighSchoolSportsScene.com).