By Gary Kalahar
Special to Second Half

BATTLE CREEK – The pain in Kelsey Sands’ shoulder Saturday morning had her thinking she would not be playing in the final round of the MHSAA Lower Peninsula Division 3 golf tournament.

“I was crying,” the Ada Forest Hills Eastern senior said of the injury plaguing her during her warm-up at Bedford Valley in Battle Creek.

Sands not only teed it up, her huge improvement from Friday’s first round typified her team’s comeback as the Hawks emerged from a tight four-team race to win their second state title in three years.

All five Forest Hills Eastern players improved their scores in the second round, played in cold conditions but markedly better than the rain and wind of the first round. Just three other players in the field improved more than Sands, who shot a 94 to come in as the Hawks’ fourth scorer after a first-round 109.

“You need to have all four scores,” Forest Hills Eastern coach Brian Telzerow said. “She wasn’t going to play. We prayed as a team, and she said, ‘Let’s give it a try.’ She played phenomenally.” 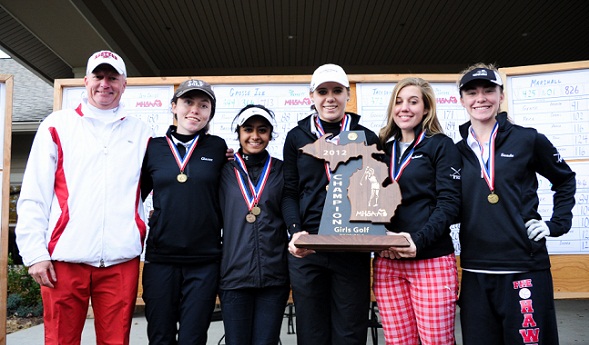 Forest Hills Eastern did not have another player in Battle Creek, so without Sands the Hawks would not have the ability to throw out a score.

“It went away maybe a third of the way through the round,” Sands said of the pain she believed came from a pulled muscle and which subsided as she got her round off to a solid start with three bogeys and a par.

Henna Singh’s fifth-place 167 with a second-round 83 led Forest Hills Eastern. Jordan Duvall shot the Hawks’ best score of the round, an 81 that left her at 169 for her third straight top-10 state finish.

“I usually come out and play well in the state finals,” Duvall said. “It’s fun for me. I like the competition at the state level.”

With his team facing a large deficit after the first round, Telzerow channeled some Ben Crenshaw and reminded his team of the U.S. team’s comeback in the Ryder Cup in 1999.

“Coach told us the story about the Ryder Cup, and we took that in perspective and said, ‘Hey, it’s 4½ shots a person, why not come back and make it happen,’ ” Duvall said. “We knew we had the potential. We knew it was going to be tough, but we knew we could do it.”

Anne Parlmer shot an 85 for the Hawks’ other final-round score.

“That was remarkable to come up with those scores, especially in these conditions,” Grosse Ile coach Jim Bennett said after the Hawks stopped his team’s bid for a third title in four years. “They stepped up when they had to.”

Telzerow said being in fourth place after the first round might have aided his team’s rally. Players from the top three teams were paired together for the final round.

“We’re the fourth team, so nobody’s really going to be paying attention to us,” Telzerow said. “Let’s go play our game and not worry about the other teams. There wasn’t any of that nervousness about how any of the other players were doing. They could play their own kind of golf.”

“They really came from out of nowhere and beat us,” Country Day coach Peggy Steffan said after her team posted its best MHSAA Finals finish.

Her fourth trip to the Finals didn’t make handling the nerves any easier for Dearborn Divine Child senior Natalie Blazo.

But Saturday was a lot better, and Blazo shot the round of the tournament to claim medalist honors. Her 76 was four strokes clear of the next-best round and gave her a 157 total.

Blazo was seven strokes ahead of Clio’s Ayla Bogie and Cranbrook-Kingswood’s Cordelia Chan.

Blazo punctuated her round with a tap-in birdie on her last hole, the par-4 No. 3. Blazo and Bogie, playing as individual qualifiers, were tied for the lead after the first round and thus paired together in the second round.

“There were some girls who were close who were playing with their teams, so I always knew there could be somebody shooting lower than me,” Blazo said. “My putting was great. I made some long ones to save par.”

Jackson Northwest took fifth at 743 for its third consecutive finish in the top six.