EAST LANSING – Tough weather conditions are a golfer’s worst enemy. That’s particularly the case when the pressure is at its peak – like at the MHSAA Finals.

But thanks to a great first day of golf Friday, Grand Rapids Forest Hills Northern didn’t have to worry about the conditions, as the Huskies relied on their 1-2-3 punch of Kay Zubkus, Lilia Henkel and Anna Fay to cruise to their second consecutive Lower Peninsula Division 2 championship Saturday afternoon on the Forest Akers West course at Michigan State University.

Coach Kent Graves’ Huskies shot a two-day total of 656, beating out regional rival Muskegon Reeths-Puffer (680) by 24 strokes. Zubkus topped Northern with a score of 151. The senior beat out Okemos freshman Allison Cui on the first playoff hole to win the individual title. Both players overcame a four-stroke deficit after the first day, with each shooting a 73 to force their playoff.

“Obviously you want everyone chasing you; it takes a lot of the pressure off, maybe allows us to not press as much as maybe we would be coming from behind,” said Graves, whose team beat out Birmingham Marian for the title a year ago. “So to have that big lead after the first day, it’s tough to beat that.”

Northern fired a team score of 332 Friday afternoon, building a 17-shot advantage over Reeths-Puffer. A week earlier, the Rockets defeated Northern in Regional play, firing a state-best score of 310. But this weekend, the Huskies were just too good.

“Northern played really well (Friday). They came to play,” Reeths-Puffer assistant coach Brennan Hallberg said. “It was windy, not quite like it was today, but their top four girls all had good rounds and unfortunately our top four girls had their worst rounds of the season. We had high hopes for this weekend, but (overcoming) a 17-shot deficit is a tall order.”

Reeths-Puffer entered the tournament ranked No. 1 and was on a roll after winning the Regional title. Despite falling a little short, the Rockets by no means had a bad tournament. Senior Karina VanDuinen shot a 161, good for eighth place for the weekend. Her younger sister, Karlie, had a 168, with senior Avery Howard (172) and junior Abby Fansler (179) also scoring for the team. 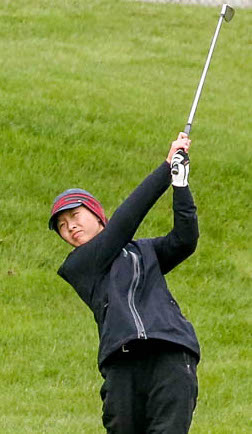 Still, it was not enough to prevent the Huskies from winning their second straight – and third overall – Finals title. Henkel fired a 153, which tied for third overall with reigning individual champion Shannon Kennedy of Marian. Fay’s 162 was good for a top-10 finish.

For Zubkus, the day was extra special. The senior, who finished tied for 10th a year ago, rallied on Saturday to force the playoff with Cui. It was the third time Zubkus had played in a playoff. The first two times did not go so well. The third time was the charm.

“Last year, my good friend (Kennedy) was four shots back going into the second day, and she text me last night and said, ‘Four back’s the number. It’s a good place to be.’

“Today I was just out there trying to put up a score that I was proud of because in past state championships I haven’t really done that. It was pretty miserable out there, but I made the best of it.”

Like all the golfers, Zubkus was able to overcome the weather elements, which at times included sub-40 degree weather, hail and sleet. Twice the golfers were called off the course due to lightning and unplayable course conditions.

Finishing behind Zubkus, Cui, Kennedy and Henkel was Fenton senior Charlotte Cunaud, who shot a 156 to finish fifth overall. Rounding out the top 10 were Cailey Rooker of St. Joseph (158), Mia Sooch of Farmington Hills Mercy (159), VanDuinen, Fay and Hailey Roovers of Birmingham Seaholm (166).