TRAVERSE CITY – The ball landed on the green a few feet past and left of the hole.

One hundred and eleven yards away, at the tee box on the 11th hole at the Katke Golf Course in Big Rapids, Glen Lake's Nichole Cox squinted through the bright sunshine on this late August day to see where she would putt for birdie.

Turns out, there would be no birdie putt. The backspin Cox put on the ball with her pitching wedge, coupled with the slope of the green, drew the ball right to the cup. Just like that, the defending Lower Peninsula Division 4 champion had her first career hole-in-one en route to a personal-best 3-under 69 in winning the Cardinal Invitational.

That shot typifies Cox's torrid pre-Labor Day start to the 2015 season. Four matches, four impressive victories, including the two-day, 36-hole Lober Classic at Grand Traverse Resort and Spa. Cox shot rounds of 71 and 76 on the Spruce Run and Wolverine courses to take the title by two strokes over Brighton's Annie Pietila, who had led by three shots after opening with a 68.

"It was crazy," Cox said. "I was proud of myself. That was my goal (to win the tournament)."

Glen Lake was the smallest school in the 26-team field.

"I think that might be the best competition we'll see until the state tournament," Lakers coach Paul Christiansen said.

The 17-year-old Cox also won two matches at Mistwood. She fired an even-par 71 to claim the Traverse City West Titan Invitational by nine strokes and then came back a few days later with a 1-under 70 to capture a triangular match by 13 strokes.

Of her five 18-hole rounds, she's played four at par or under par.

"She's pretty motivated," Christiansen said. "She is her own toughest critic. She has high expectations. She'll say her goal is to win every match this year."

To do that, Cox said she's had to sharpen her focus. She said she no longer worries about her score during a match. Instead, she is more intent on the "simple things," like making sure she hits the fairways and greens. The rest, she said, will take care of itself.

"I've been making a lot more up and downs," the junior said. "I feel good about it right now."

Always known as a long ball hitter off the tee, Cox has steadily improved as a putter.

"I can basically two-putt from anywhere (on the green)," she said. "I don't three-putt much. That's a big step from last year."

She's also had her share of one-putts, knocking down a number of long birdie attempts.

Her putting has been aided by a stronger approach game, thanks to a new set of Callaway Apex irons she put in her bag before the season. 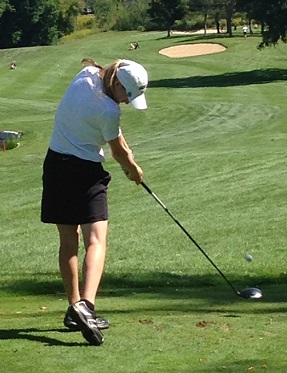 "(The switch) was mostly to control her iron play, trajectory and distance," Scott Wilson, her swing coach in the Junior Elite program at Crystal Mountain, said. "She dialed in almost immediately. Certainly that's a concern when you make an equipment change like that (before the season), but it was the right fit for her. I wish we would have done it sooner."

Cox, who was third in LP Division 4 as a freshman, enjoyed a solid summer on the links, competing in the Michigan Women's Open and Michigan Amateur, where she reached the Sweet 16.

"Every year she just gets better," her father, Duane, said. "She's playing with more confidence. It's not just one thing that's getting better, everything is getting better. Her numbers this year are so much better – and they were good last year."

Christiansen said it's fun to watch her play.

"Really good players have their own swing coaches, and I don't want to mess that up," he said. "I think you can have too many voices. My job is to keep her relaxed, keep her in the moment, keep her level-headed so she's not too hard on herself. You have to be able to let a bad shot go."

Christiansen maneuvers around the course to watch all of his golfers during a match, so he's not with Cox constantly.

"That's one cool thing about golf, unlike some other sports where the coach is with you 100 percent of the time," he said. "You've got to adjust to situations yourself and learn course management. She's played so much golf, she's really good at figuring out what she's doing right and wrong."

Cox has been around the game for years. When she and her twin brother Brandon were in kindergarten, their parents bought a home with a driving range. The family has operated the Dune Valley Driving Range the last 10 years. It's across the road from the Dunes Golf Club, which the family plays regularly.

"I thought it would be a great place for kids to grow up," Duane said.

Cox edged Farwell's Bria Colosky by one stroke to win last season’s MHSAA Final with a 36-hole score of 159. They and two others entered the second round tied for first at 83, but Cox shot a 76, to Colosky’s 77, to finish the competition.

"I thought I lost it because I double-bogeyed my last hole," Cox said. "I was pretty convinced I blew it for myself. I was surprised that I won."

Cox would like to take that surprise element out of the equation this year.

"The goal is to get better every match so that next month she's ready to roll (in the MHSAA tournament)," Christiansen said.