“We all wanted to match,” senior Carrie Radomsky said. “We sprinted toward them when we saw them.”

The stylish hats were needed on a frigid afternoon at The Meadows at Grand Valley State University, and they coincided with the Fighting Irish’s balanced play on the course.

The Fighting Irish tallied a two-round score of 690 and defeated runner-up Harbor Springs (724) by 34 strokes.

“It means a lot,” fourth-year Kalamazoo Hackett coach Alan Radomsky said. “I was lucky when I came in four years ago that it already was a strong program. The players made the decision not only to be a good program, but they wanted to be great and do the best that they could.

“I believe if you set high expectations for kids, they love that, and these girls basically accepted that challenge. They practice hard every day, and they have fun every day. These girls have earned everything because of the amount of effort and work they put in.”

The Fighting Irish, who closed with a 341 in the final round, had two girls finish among the individual top 10.

“This is so special,” Carrie Radomsky said. “I’m so happy to be able to win with my team, and this is the best team I could ask for to win a state championship with.

“At the beginning of the year we knew that we had a good chance to win state, and that has made it that much more special.”

Stull, the team’s No. 1 player, struggled on the front nine Saturday, but turned it around by shooting 1-over on the back.

“I realized that I needed to pull it together for my team because I wanted to make them proud, and I wanted to win a state championship,” Stull said. “I was playing for them and not myself. I know that it was hard conditions, but I’m so proud of everyone and everyone played really well.”

Alan Radomsky was thrilled to share the feat with his two daughters on the squad.

“It’s incredibly special,” he said. “When the job came open, I didn’t want to coach. I thought they could learn more from someone else, and I could just be a parent.

“But I took (the job), and it ended up being the best experience I’ve ever had with anything I’ve done.” 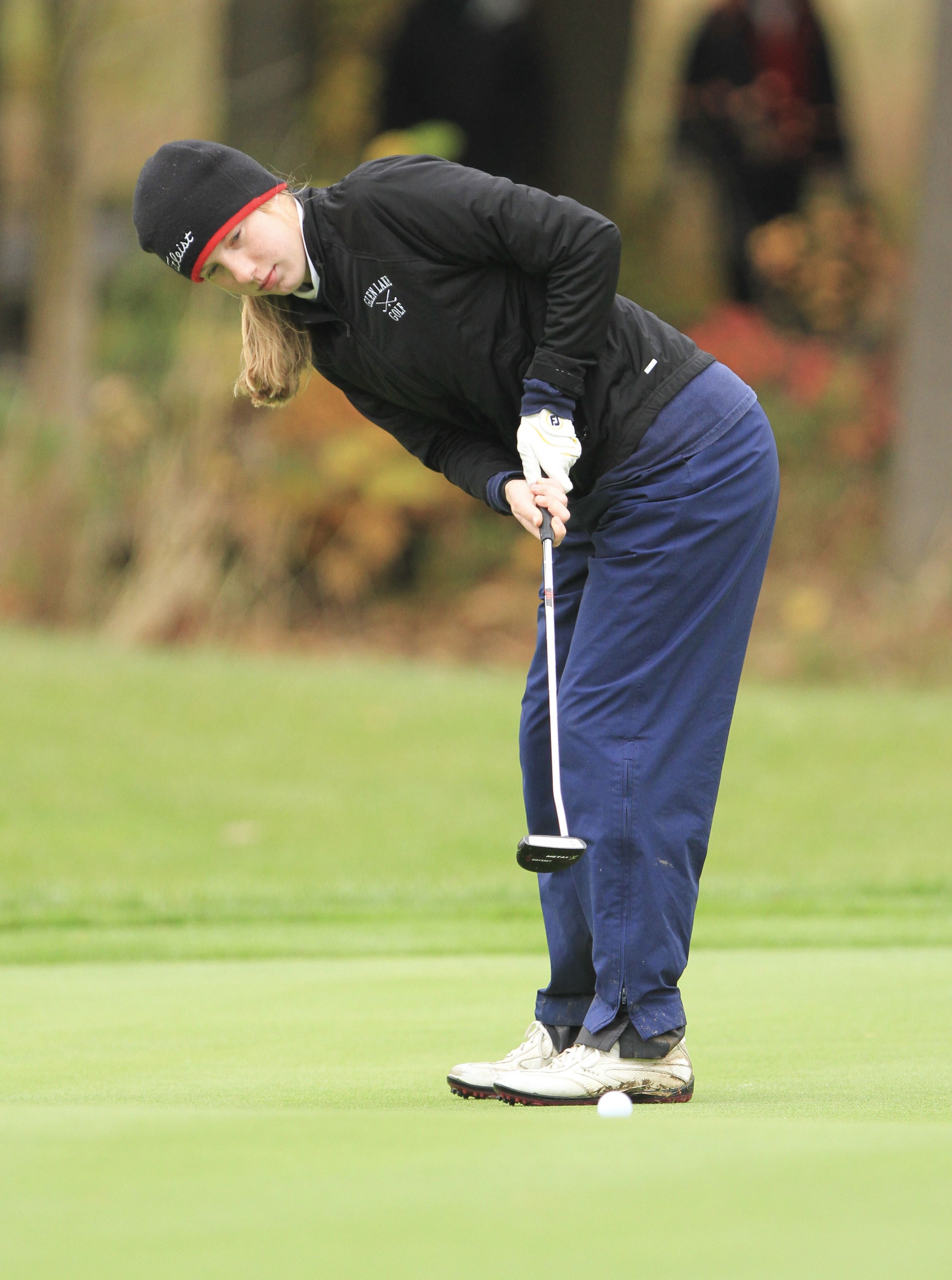 Harbor Springs recorded its best Finals finish in school history. Senior Abbey Detmar made a fantastic comeback from a first-round 90 and carded a tournament-low 75 to place third overall.

“We strongly felt that we had a shot at it,” Harbor Springs coach Pete Kelbel said. “Coming out of regionals we had the lowest score of all the teams, so I thought coming down here that we were a legitimate contender for the title.

“We knew the history of Kalamazoo Hackett, so we’re not disappointed to lose to them. I’m very proud of the girls for runner-up and very happy.”

“I just wanted to do better than Friday and stay focused,” Cox said. “My goal coming in was to win, and when I looked at everyone who was playing, I thought I had a chance.”

Cox registered three birdies in her final round, and her only hiccup was a double-bogey on the last hole.

“That stunk, but I was still OK,” Cox said. “I was a little worried after that because I didn’t know how far ahead I was.”

Cox said an improved putting stroke and consistency from the fairway helped propel her to the top of the leader board.

“All of my putts were going in until that last hole, and I was getting on the greens in regulation,” she said. “I also hit my driver straighter.

“I don’t think I’ve comprehended all of this yet, but I’m very happy.”

PHOTOS: (Top) Kalamazoo Hackett had been a contender in the past, but claimed its first MHSAA title Saturday. (Middle) Maple City Glen Lake sophomore Nichole Cox follows through on a putt on the way to winning the individual title. (Click to see more from HighSchoolSportsScene.com).