When his team shot a 352 to place fourth after the first day, Harbor Springs coach Pete Kelbel pointed out that 330 number as a barometer for the Rams to try and close the 12-stroke gap that existed between them and first-place Almont.

“We already did a 330, and if we shot anywhere near what we did, we will be in the hunt,” Kelbel said.

Harbor Springs not only got to 330, but bettered it – and as a result was more than just in the hunt when it all was said and done.

The Rams were MHSAA champions.

Thanks to a blistering score of 328 in Saturday’s second and final round, Harbor Springs finished with a total of 650, 11 shots ahead of runner-up Jackson Lumen Christi.

Almont was third at 699, North Muskegon fourth with a 716 and Kalamazoo Hackett was fifth with a final score of 718.

The title was the first in Harbor Springs girls golf history. The Rams finished runner-up in 2014, their lone top-two finish before Saturday.

A big reason for the team jump was the improved scores on the second day from junior Madi Bezilla and sophomore Evie Garver.

After shooting an 87 on Friday, Bezilla did 11 shots better Saturday with a 76.

Garver also had an 11-stroke improvement, going from a 92 on Friday to an 81 on Saturday.

“(Evie) is probably the longest-hitting girl here,” Kelbel said. “Of course in golf you have to get the wedge shots on and the putts in, and that’s what she did today.” 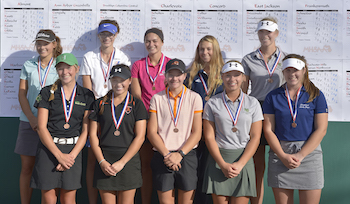 Lumen Christi entered the day one shot back of Friday leader Almont and turned in a second-day score of 350, but it wasn’t enough to match Harbor Springs.

“This team won it,” Lumen Christi head coach David Swartout said of Harbor Springs. “My hats off to any team that can shoot that score on the second day. Typically on the second day, scores go up.”

However, the second-place finish was still a source of pride for Lumen Christi.

Swartout said the program was almost scrapped five years when only two girls came out for the team, and he saw one of the current seniors shoot a 21 on her first hole at the 2014 MHSAA tournament.

“To come from that to runner-up state champions, that’s phenomenal,” he said.

Individually, Brooklyn Columbia Central junior Alissa Fish emerged from a four-way tie for the lead after the first day to win medalist honors, following a first-day total of 79 with an 80 on Saturday.

“I struck my irons close enough, but I didn’t putt real well,” Fish said. “I actually putt really bad today and it had me in tears at some point. A lot of it came down to putting it close enough to where I could finish out a lot of holes.”

The individual runner-up was Almont senior Grace Zimmerman, who followed up a 79 on Friday with an 82 on Saturday to finish at 161.