Carrying the heavy load of a No. 1 ranking all season after two consecutive years winning the Lower Peninsula Division 2 title, Grand Rapids Forest Hills Northern pulled away during the second round Saturday to secure its third consecutive MHSAA Finals championship at Forest Akers East on the campus of Michigan State.

Northern led South Lyon by only two strokes going into the final round (337-339) – an insignificant margin in team golf, which tabulates four individual scores. The past two years Northern had much larger cushions over the competition.

“We talked a lot about that before the second round,” coach Kent Graves said about having no room for error. “In years past we haven’t had to do that; we just had to get through it. Today we really had to focus, and they did, and it was a big win for us.

“I just love the kids. I’m just so proud of them. Not the fact that they won three in a row, but just that grit that they had coming back ... to focus and crush it today. I’m very proud of them.” 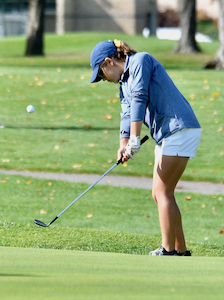 “For us, I think being here three times was the difference” Graves said about the difference between the first and second rounds. “All five of our girls played in the final last year. You just can’t discount experience. To know where you’re at and know what you’ve got to do on the second day. I think they just went out and did it.”

Gabriella Tapp, a freshman from South Lyon, was not on most people’s radars, yet played two consecutive rounds of 75-75 to win the medalist title. She led by one stroke after the first round over teammate Katherine Potter, who finished 76-83-159 for fifth place individually as the pair powered the Lions to a team runner-up finish. South Lyon (674) was ranked No. 5 coming into the weekend.

Taking third place was Grand Rapids Forest Hills Central with a team total 711. Farmington Hills Mercy took fourth at 730, while Birmingham Groves and Fenton rounded out the top five teams, both finishing with 732.

Graves said Northern’s third consecutive title was due to a complete team effort – especially being under the microscope all season.

“They’ve got pretty good heads on their shoulders. My top two players – Lilia and Anna – play golf 12 months of the year. They play in a lot of big tournaments. The ones I’m really proud of, and I say this every year, you really don’t win this thing with just your No. 1 and No. 2; everybody has a good one and two. It’s players like Ava Frost that came back and shot a 77 today at our three spot. Rylee and Bailee Walters, our twins, came back at 84 and 87 today. That’s where you win it, at those three and four scores.”

So, could there be a fourth consecutive championship in Northern’s future?

Henkel and Fay return, with three juniors who are waiting their turns.

“These three girls have been out here for two days with us, walking the course and they know what it takes, and they definitely want to be a part of this next year,” Graves said. “And I’ll tell you what; they’re pretty good players. They’d be in the top three for almost every team in our conference.”