By Burt Angeli
Special to Second Half

“It was nice to go out on top in my last year,” said Bianco, who will leave coaching to become the elementary school principal. “This is such a nice group of girls that played hard and got better every week, and that’s what it’s all about.

“It’s really enjoyable. I couldn’t ask for a better group of girls.”

Cassie Feira, U.P. runner-up medalist last year, led the Mountaineers with a 104. That score was good for third behind medalist Margo Brown of St. Ignace, 98, and Alyssa Norback of L’Anse, at 102.

“We had no real big surprises,” Bianco said of his Mountaineers. “Our number one Cassie has been shooting well all year, and she shot around her average.

“Catherine Brown played a little better than her average.”

Margo Brown, who helped the Saints reach the Class C Basketball Final, fired a 51 over the front nine and 47 on the back.

“Yesterday I had a good practice round, and today wasn’t my best game at all.” 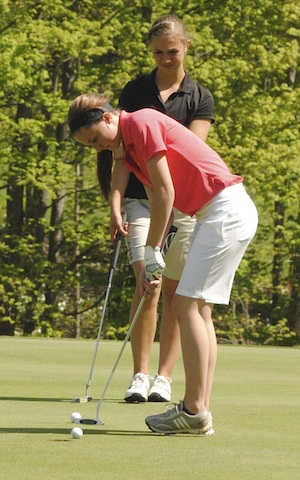 “I chipped pretty well and my driver was pretty good,” Brown said.

Norback, playing in the same group with Brown and Feira, registered 50-52 for runner-up medalist. The senior, one shot out of a medal playoff last year, parred the 357-yard fifth hole at George Young.

Brown and others cited the course conditions and sunny weather. The rough winter appeared to only affect a couple areas.

“The course is in really nice shape, and I was surprised,” Brown said. “We came here a couple weeks ago and it was snowing.

“I was really happy with the course conditions. The greens are very nice and pretty receptive.”