HARRIS – Paxton Johnson only achieved half of her goal in her final high school golf match here Wednesday, but it was a special half.

"I wanted the team to win so bad," said Johnson. "I can honestly say I wanted the team win more than the individual win. I tried to encourage my teammates and play as best I can and try to pull it off."

Johnson, who has received a golf scholarship to Northern Michigan University, joins Marquette golfers Kendra Palmer (1996-99) and Carley Saint Onge (2008-11) as the only four-time champions. "It is an honor. I really look up to both of them," she said.

"It is amazing. It was a really great four years," Johnson said as she relaxed outside under the best spring conditions to date, sunshine and 81 degrees.

She finished 11 strokes ahead of runner-up Emma Hofer of Menominee and knew she was the heavy favorite but pushed the pressure to win aside. "I was competing against myself. I knew if I stayed out of trouble and out of the bunkers I would be okay. I wasn't thinking of anything else, just thinking about one shot at a time," she said.

Johnson overcame a pair of consecutive short putt misses – for par and birdie – on holes 12 and 13, respectively. "I tried not to get too discouraged and tried to let it go," she said, still visibly perturbed at those miscues after the round ended. "I didn't let it get in my own head. But if I had capitalized around the green I would have played much better." 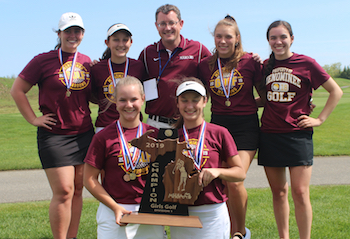 She also missed a good opportunity on the short No. 14, leaving her tee ball short-left and then chipping over a bunker to the back fringe before two-putting for par. "I'm not upset with par, but the hole should be a birdie. But pars are good. You can't get too mad at par," she said, although it was obvious she was still peeved at herself later.

Johnson, who won the Upper Peninsula Ladies Golf Association crown last year, stayed within herself most of the balmy day by following her primary creed. "I was kind of in a zone. I focused on my game. Swinging freely is my best thing," she said.

Escanaba coach Brian Robinette said Johnson "is fundamentally as sound as any high school player." He also said the "consistency, the way she hits the golf ball" is a key. "She is a high IQ golfer. She can regroup (from a bad stretch) and can leave the past in the past. You rarely see her follow up a bad shot with another bad shot."

He is also impressed with the way "she can compress the golf ball and works right through the bag, driver to wedge."

Two of her playing partners, Emma Hofer of Menominee and Morgan Rhodes of Marquette, copied Johnson's approach by paying attention to their own shots and were not overwhelmed by her dominance.

"I know she is better than me. I'm totally fine with that," said Hofer, a frequent opponent the past four years. "I try to get closer to her and if I'm close to her I'm fine."

Rhodes said playing with Johnson helps her: "It makes me a better player playing with someone more advanced. I just don't compare myself to them."

Menominee has won 15 U.P. girls titles, but this was the first since 2008 and the first for coach Tony Hofer, who has two daughters (Emma and Josie) on the team.

"All year we've had all five girls score well. Different girls step up and do something good at every meet," he said, noting four seniors have led the way as they chased Escanaba. "We were not very good four years ago, but they stuck with it. This year we knocked off a handful of strokes here and there."