Montague pulled off an amazing feat Saturday at Forest Akers West by winning its first MHSAA Finals team championship in just the fifth year of the program’s existence.

The Wildcats scored 343 at the Lower Peninsula Division 4 tournament to set a new school record, besting Lansing Catholic at 370. All five Montague players finished among the top 16 individuals, with junior Orianna Bylsma leading with a top-five finish at 81, and senior Megan Brown coming in 8th with 84.

“My mind is racing,” said head coach Phil Kerr. “I’m just so happy for the girls. They earned this. We thought we could do this; we brought four players back from last year. We wanted to win a county championship, win the Regionals, and then just see what happened at states. It’s unbelievable.”

The team finished fourth at the Final last year in its first-ever two-round tournament. Kerr said in 2019 the Wildcats played much better on the second day, which elevated the team into the top five. So, there was some nervousness coming into the tournament this year knowing it would be reduced to one 18-hole round, not the traditional 36 holes over two days. The cutback was due to COVID-19 protocols for distancing and to allow teams to make one day trip instead of needing to stay overnight.

“It’s definitely different, and there’s more urgency for sure,” Kerr said about the reduction to 18 holes. “Getting off to a good start is huge. There’s no time to make up for it. We really focused on, how do we come out, where do we stand after the first three or four holes, and make sure we take care of that.”

Jump out they did.

The Wildcats were ahead by as many as 15-20 strokes very early in the day before sealing the win by the large margin over Lansing Catholic, Michigan Center (371) and 2019 champ Grand Rapids NorthPointe Christian (372). 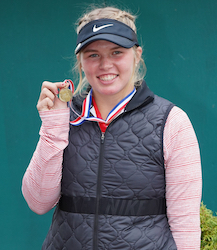 “On the front nine you never know, something can always happen,” Kerr said about building the original lead. “I think we got comfortable toward the back of the front nine and we relaxed a little bit, but we still shot an amazing score.

“I’m really happy for our seniors, Megan Brown and Katie Unger (tied for 12th). Megan’s been on varsity since she was a freshman. I think she shot 145 at the Regionals that first year, and just shot 84 today to help set our school record and (win) a state championship. Just a credit to hard work. Special kids who love grinding and working hard. I hope they see the rest of their lives if they put their heart and soul into something, they’ll see the results like this.”

Junior Kamryn Shannon of Michigan Center was medalist at 2-over 74, just ahead of Jacquelyn O’Neill of Harbor Springs at 75. Shannon had a troubling day at Regionals scoring an 87, but turned it around for the Final. She admitted the 87 rattled her a little heading into the season’s final event.

“I’ve been working on my driver a lot recently, and today I was hitting almost every fairway, and if not I was just off on the edge,” Shannon said after accepting her first-place medal. “My putting was pretty good today also.”

Shannon said she finished outside the top 30 last year as a sophomore with scores in the 90s.

“I got new clubs and immediately my average started dropping,” she said about getting properly fitted. “I’m super proud all of my hard work paid off in the long run.”