HUDSONVILLE – Ella Thomasma’s love of the game was worth the pain.

The Hudsonville junior persevered through a serious knee injury to finish her season among the best golfers in the state.

Thomasma competed at this past weekend’s MHSAA Lower Peninsula Division 1 Finals as an individual qualifier and placed 47th overall. She carded rounds of 89 and 90 at The Meadows at Grand Valley State for a two-day total of 179.

And Thomasma made the field, and then played those back-to-back 18-hole rounds, with a torn right knee ligament suffered six months ago.

“It was so rewarding to finish the season, and it’s pretty cool to be able to say I made it the entire way,” Thomasma said. “No one would probably do what I did, that would be my guess, but I just love golf and I didn’t want to miss my junior year.”

Thomasma suffered an anterior cruciate ligament injury in March during high school soccer tryouts and was done for the rest of that season.

Doctors encouraged Thomasma to have surgery, but she opted out due to her desire to play golf this fall.

“The doctor told me I should do it when the injury happened, but I told him that I couldn’t do that,” Thomasma said. “I had to wait until golf season was done because I knew I wanted to play golf.”

“When it happened, she said she wasn’t getting surgery until after the season so she knew right away she was going to try and go as long as she could,” he said. “She even went out West with Young Life and had to do hikes. We talked about getting a medical clearance to use a cart, but she didn’t want any part of it.” 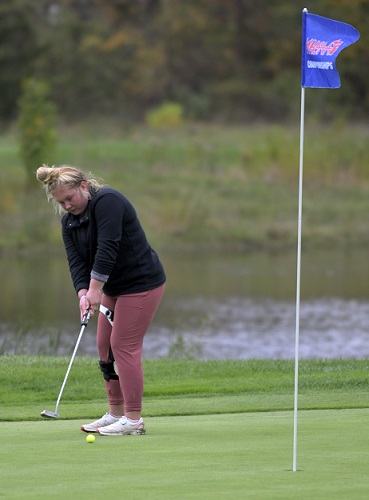 Thomasma emerged as the Eagles’ top golfer this fall despite the overwhelming pain she experienced often.

“It’s been pretty bad, and it hurts all the time, but I wasn’t going to stop golfing,” Thomasma said. “I think walking was the hardest part for me. It wasn’t hitting the ball, it was walking all the courses – and some of them were tough to walk. It just made it tougher.”

Thomasma wore a brace on the knee to alleviate some of the pain.

“When I was swinging (the club), it was fine, but I would hit my shot and then be like, ‘Dang, I have to walk to the next shot now,’” Thomasma said. “It was tough, but I did it.”

DeSmit was proud of Thomasma for her grit and determination.

“I just think it’s awesome what she did this year, and she’s just a grinder,” he said. “I could tear up about it because she just gutted it out all year.

“It’s a testament to her for grinding through it and putting her team ahead of herself and saying that she was going to play to help the team.”

Hudsonville competed at the Regional earlier this month at Crystal Mountain and finished fifth as a team. The top three teams from Regionals advance to Finals.

Thomasma, however, qualified as an individual after firing a 92 to tie for ninth – and earn the third of three qualifying spots for golfers whose teams do not advance as a whole.

“I knew if I was going to wait to have surgery, I wanted to make it as far as I possibly could and I did it,” Thomasma said. “The conditions at the state finals were tough, but I didn’t play awful so I’m not complaining. I wish I would’ve played better, but I didn’t end up too bad.”

Thomasma received a special honor at the end of the season.

“She was given the Eagle Award, which is given to an athlete that you want to replicate (from) our program,” DeSmit said. “Not many kids would do that, and she’s just tough.”

Thomasma, who said her meniscus was probably torn as well because of the delay, was scheduled to have surgery this week.

PHOTOS (Top) Hudsonville’s Ella Thomasma sends a drive during Saturday’s second round at The Meadows. (Middle) Thomasma, playing the Finals with a torn ACL, puts a putt close to the cup. (Click for more from High School Sports Scene.)