GAASTRA — Iron Mountain's Reidet Husing shot a tournament-low 99 on Wednesday to capture the medalist honor and lead the Mountaineers to the team title as well at the MHSAA Upper Peninsula Division 2 Girls Golf Final at the George Young Recreational Complex in Iron County.

The Mountaineers as a team shot 469, nearly 30 strokes lower than runner-up Munising, which carded a 495. The team title was Iron Mountain’s sixth and first since 2016.

Husing, a sophomore and multi-sport spring athlete, is primarily a soccer player for the Mountaineers.

"It feels pretty good to come here and win," she said. "The greens were really fast and hard to judge, but I think I played pretty good." 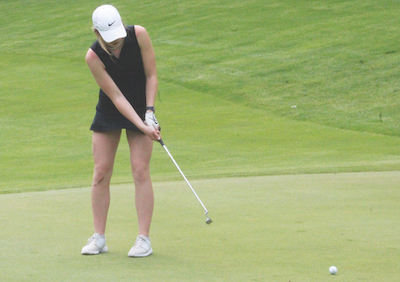 Host West Iron County was third with a 518, as the Wykons were led by Madison Berutti, who tied Jenna Matson of Munising with a 104 for the individual runner-up honor.

Iron Mountain's Natalia Brown finished eighth with a 119, two shots better than teammate Lily Verette who carded a 121 for a ninth place finish. Bella Rosenthal shot a 130 and Lulu McCash carded a 152 to round out the Mountaineers lineup.

Maizy Brown of St. Ignace with 105, Hannah Larson of Bark River-Harris with 109, Peyton Cole of Stephenson at 110 and Kya Dallavalle of West Iron at 116 finished fourth through seventh, respectively. Logan Peters of Munising shot a 122 to round out the top 10.

Stephenson's 530 was good enough for a fourth-place team finish, followed by Bark River-Harris with a 539, Hancock with a 548 and Pickford with a 549.