While Montague went down to the wire in edging Lansing Catholic and repeating as team champion, Ann Arbor Greenhills freshman Mia Melendez outdueled Michigan Center senior Kamryn Shannon for the individual title in a showdown that came down to the final hole.

Montague and Lansing Catholic both shot 675 over the two-day event, but the Wildcats held the upper hand by virtue of the fifth-score tie-breaker. Jackson Lumen Christi finished third (701), followed by Adrian Lenawee Christian in fourth (706) and Remus Chippewa Hills fifth (722).

The Wildcats, who ran away with the title last year in defeating runner-up Lansing Catholic by 27 shots, featured five players under 90 each of the two days this weekend.

“I can’t believe that,” Montague coach Phil Kerr said. “I’m so proud of them. I’m not surprised, but still under these conditions, you’ve got to show up and compete and these girls did.”

Shannon held a two-shot lead over Melendez following a 2-under 70 on Friday, but Melendez made several clutch putts Saturday to make her move during what amounted to a head-to-head match. Melendez chipped in for par on their final hole to wrestle away the medalist honor, while Shannon settled for bogey.

Melendez shot 71 on Saturday for a two-day total of 143, one shot better than Shannon’s 144. The newly-crowned champ called the round “intense.”

“This particularly means a lot because it’s the state championships, and it’s always been my goal to win something like this because everybody’s going to see it and it’s a pretty big deal.” 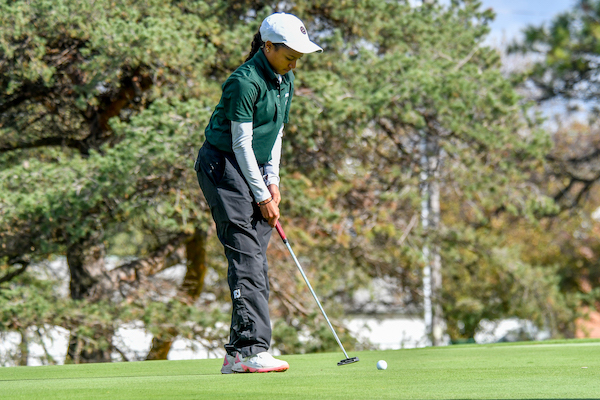 “I’m so proud of the seniors – it’s definitely the end of an era. Ori and Gabby have been through all of it,” Kerr said. “(Their) freshman year, we were nobody. Sophomore year, it was the biggest deal that we made state and then got fourth. They won state (last year), they backed it up (this year).

Six years ago, Montague did not even have a girls golf team. Before last year, the school had never won a Finals title in a girls sport.

Now, the Wildcats have two championships in as many years in girls golf.

“I didn’t even play golf five years ago. I hadn’t even touched a golf club in my life five years ago today,” Moreau said. “And if you would have told me, ‘You’re going to win a state championship,’ I would have said, ‘I don’t play football.’

“I couldn’t have even imagined this. This is so surreal.”