EAST LANSING – Every high school golf coach reminds his or her team that “every stroke counts.”

The exception is Rochester girls golf coach Jeff Haney, because his team has learned that lesson first-hand over the past three seasons.

Rochester missed out on making it to the MHSAA Lower Peninsula Girls Golf Division 1 Final by four strokes in 2013, then by two strokes in 2014 and, last year, the Falcons lost out to Traverse City West for the championship on a fifth-player score tie-breaker.

That cumulative heartbreak fueled plenty of extra desire this fall for Rochester, which certainly made every stroke count in a 21-shot victory over Novi for the Division 1 title Saturday at windswept Forest Akers East in East Lansing.

“Oh yes, because of what’s happened the past few years, it’s very easy for me to get their attention on the importance of every single shot,” said Haney, who guided the Falcons to their third Finals championship in the past nine years, and fourth overall. “These girls have all shaved strokes off their average from the start of the year, which is why we were able to win it.”

The Falcons were paced by senior standout and fifth-place individual Brooke Busse (73-75-148), but the real secret to their success was depth. Exhibit A was the Falcons’ fifth golfer, junior Keri Yang (83-83-166), whose total was 15 shots better than any other team’s No. 5 player. 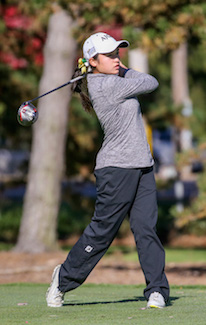 “I’m just very relieved that it’s over and that we did it,” said Busse, who was part of all three years of Finals-related heartbreak for the Falcons. “We knew we could do it, and we were really focused on staying positive. A big key is that we putted better (Saturday), and that’s why we shaved a few strokes off our total from the first day.”

Rochester actually extended its lead in Saturday’s final round, just the opposite of last year when unranked Traverse City West charged from five strokes back to tie for the top spot, eventually winning on the tie-breaker. Since neither Rochester nor Traverse City West had a senior in their lineup last fall, the stage was set for a rematch.

While the lower half of the West lineup struggled, sophomore Anika Dy certainly did her part for the Titans.

Novi senior Alexa Hatz (147) shot a sizzling 3-under par 69 on Saturday – the best round of the tournament – which moved her up to fourth overall and powered her team to a surprising second-place overall finish. Also placing in the top 10 for the Wildcats was junior Abby Livingston, who shot 151 and tied for ninth.

But the story of the weekend was the continued surge by Rochester, which just one week ago set the state girls golf record for postseason scoring with a 289 total at Twin Lakes Golf Course in Oakland Township.

That Regional performance was an incredible achievement for a Rochester program that has had plenty of highlights in recent years. The Falcons have finished in the top 10 at the Finals 16 times over the past 21 years, with four MHSAA titles (the others coming in 2002, 2008 and 2009) and three runner-up finishes (2005, 2007 and 2015).

Haney said it was huge to validate that Regional performance by staying hot and winning the program’s first Finals title in seven years.

“It’s a big relief to tell you the truth,” said Haney, whose team was able to handle the increasing winds on Saturday, which were more of a factor on the more open East course than Forest Akers West. “There are some great teams and great individuals in Division 1 that we battle with all the time. This team definitely earned it.”

PHOTO: (Top) Rochester's Veronica Haque putts during Saturday's second round at the Lower Peninsula Division 1 Final. (Middle) Traverse City West's Anika Dy watches a drive during her round; she finished as individual medalist. (Click to see more from HighSchoolSportsScene.com.)