EAST LANSING ‌—‌ ‌The rules of golf are pretty simple — for the most part.

But for one brief moment Friday at the MHSAA Lower Peninsula Division 1 Girls Golf Finals, Northville sophomore Samantha Coleman had a mental lapse. And she broke a rule.

After her third shot found the green on the par-4 ninth hole, she walked up onto the green and at the request of a playing partner, she marked her spot and moved her ball out of the putting line. When it was her turn to putt, she failed to move the ball back to its original spot. She was assessed a two-stroke penalty.

“The funniest thing is, as I walked up to the ball and while she told me to move the mark, I thought to myself, ‘Don’t forget to move it back.’ I always do,” Coleman said. “And then I was happy with par because it was a long putt. I was really proud of how I was doing. And to know that (mistake) was how I doubled — because I didn’t move it back — that was really rough.”

The mistake really got to Coleman, who had played her first 12 holes under par. That’s when her coach, Chris Cronin, stepped in.

“That’s really, really tough. And when you get emotional when you’re competing, it’s hard to concentrate and it makes it hard to finish,” Cronin said. “We talked for a long time. I basically walked with her for the last four holes. When Sam is playing, I let her play golf. She’ll normally see me every 3-4 holes. But today, I knew she needed me there to finish. We walked and talked. The one thing I told her was, ‘You’ve got to let your teammates pick you up.’ She’s thinking, ‘Well, what if my two strokes (cost us) and I told her, ‘You can’t worry about that. You’ve got to trust your teammates to pick you up.’  I think that gave her solace and comfort so she could finish the way she did.”

And what she and her teammates did was spectacular. Trailing Rochester Adams by a pair of strokes with five holes to play, Northville rallied to capture its third-straight Division 1 championship at Forest Akers East in East Lansing.

Northville shot 313 to best the Highlanders, who finished nine strokes back with a team score of 322. Grand Blanc was third with a score of 328, followed by Plymouth (330) and Rockford (334) in the top five.

Coleman finished with a 3-over 75 to lead the Mustangs, who became just the ninth program in Lower Peninsula history to win three straight girls golf Finals championships. The last to do so in Division 1 was Grand Blanc (2004-06).

Northville’s depth shined Friday, with just six shots separating its five golfers. Sophomore Avi Gill and junior Haesol Park each carded 79s, while senior Katelyn Tokarz finished with an 80 to round out the team’s scoring. 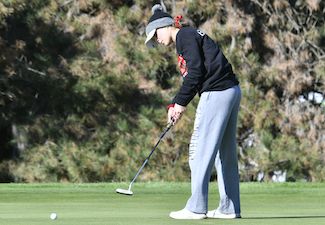 “That’s kind of our team’s MO. We’re able to finish strong. The girls really executed today. A good example was our No. 4 golfer, Haesol Park. She started six over after four holes. It was a rough way to start. She finished with a 79 today. That’s somebody hanging in there, grinding it out. All the girls did that. They knew that that’s what it was going to take to win today.”

After a rough start, Rochester Adams made a move and took the lead.

“I’m proud of every single girl. I mean, the way they played and battle through things,” Adams head coach Jeff Kutschman said. “The conditions were changing. We had sun and no wind for a while. Then it felt like a 25-30 mile an hour wind for a couple holes, cold and cloudy. Then it was back to sunny. The way they battled through the conditions today was outstanding.”

Sophomore Grace Wang paced the Highlanders with a round of 76. Freshman teammate Laura Liu added a 78.

Grand Blanc sophomore Kate Brody was the tournament medalist, shooting a 2-under 70. She was the only player to break par.

“It feels great that all my hard work has paid off,” said Brody, who finished third overall a year ago. “I had to stay focused, stay calm and take my time on my shots. The conditions were rough but I think I did a good job adjusting to it. I have practiced so much, put a lot of work in. I’m just glad that I could come out with the win.”

PHOTOS: (Top) Northville’s Samantha Coleman follows through on a putt during the Division 1 Final on Friday at Forest Akers East. (Middle) Grand Blanc’s Kate Brody putts during her run to the individual championship. (Click to see more from HighSchoolSportsScene.com.)