But it provided the Mustangs with ample motivation to turn the tables on their closest challenger and extend a historic run.

Northville won its fourth straight MHSAA Finals on Saturday by completing a two-day total of 615 strokes at Grand Valley State’s The Meadows.

“I think, if anything, losing Regionals to Plymouth really motivated us to play better at states and helped us prepare more versus winning Regionals and coming into the first (seed),” Northville senior Haesol Park said. “I wasn’t part of the first (Finals championship), but it’s really been an amazing experience. It’s just amazing to be part of a team and not just individually winning. Just the whole team contributing to win one big award. It’s unreal.”

Another senior standout, Megha Vallabhaneni, led the Mustangs with a pair of stellar rounds.

She carded a 75 on Friday, and added a final-round 1-under-par 71 to place third overall.

“It’s obviously an awesome feeling, but there was a lot of pressure going into it with already winning three (in a row),” Vallabhaneni said. “Losing to Plymouth did affect us, but we knew we were going to do well and we played one stroke at a time and one hole at a time.” 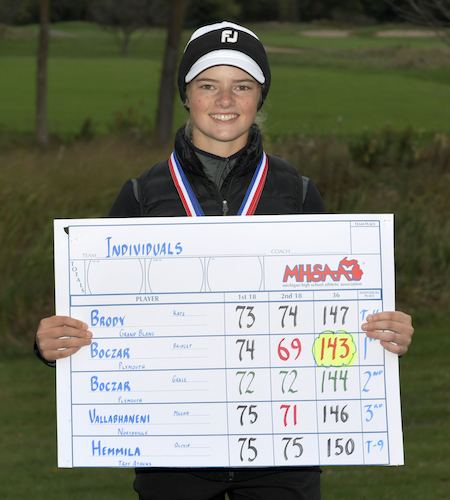 The Mustangs became the eighth school in MHSAA history, and second in the Lower Peninsula, to win four straight Finals, and also the first to do so in Division 1.

“Obviously to be in that elite company is amazing, and it's not something we talk about a lot, but we also understand that there are those opportunities in front of us to take advantage of,” Northville coach Chris Cronin said. “Winning state titles and adding our name to the record books with winning four in a row is an incredible feeling, and it has been an incredible journey for me and for this team.”

Despite his team being the favorite entering the Finals based on past successes and the return of four from last year’s squad, Cronin cautioned against looking too far ahead.

“I think the great challenge all year has been living up to those expectations that everybody thinks you are a shoe-in for the state title, but we knew both Plymouth and Okemos were going to be outstanding teams,” Cronin said. “Just keeping our head about us. We didn’t win Regionals, and maybe that made us play a little loose on day one and we were a little more comfortable. We had enough of a lead yesterday that we didn’t have to build on it too much today to take the victory.”

A total of 13 golfers were within four strokes of the lead entering Saturday, but Bridget Boczar emerged from of the pack with the best round of the Finals after opening with a 74.

“It was really exciting, and I didn’t really focus on winning this weekend,” she said. “I just focused on striking the ball well, putting a good stroke on my putts and then I knew eventually I would be at the top of the leaderboard somewhere.

“Just to finally make a few birdies on the back nine felt really good, and to end up on top, it’s great to finally get the job done.”

Grace Boczar was tied for the first-round lead with an even-par 72, and again shot 72 on Saturday.

“I didn’t care where I finished this weekend as long as I played well, and I did that,” Grace Boczar said. “I played some of the best golf I have all season, and so I’m very proud of how I played. I just focused on my game and what I could control and did that well.”

Both sisters are headed next to Oakland University to play golf.

“This is one of the best teams Plymouth golf has ever had, and we’ve come in second twice in the last four years,” Bridget Boczar said. “It’s a little disappointing not to win, but Northville is so good and they are such great competitors. They really deserved it.”

PHOTOS (Top) Northville's Samantha Coleman hits out of the sand during Saturday's second round at The Meadows. (Middle) Plymouth's Bridget Boczar shows her team's score card, which notes her individual championship score. (Click for more from High School Sports Scene.)