The Eagles’ ace shot an even-par 72 on Sept. 11 at Cherry Creek Golf Club in Shelby Township to win her third Macomb County Tournament championship. Chang – also a two-time MHSAA Finals placer – finished eight strokes ahead of the field and led Eisenhower to its second straight county team title, earning the MHSAA “Performance of the Week.”

Chang is averaging 34.8 strokes per nine-hole match this season – down nearly a full stroke from a year ago – and 71.7 strokes in tournament play, an improvement for more than 1.5 strokes per event. She tied for sixth at the Lower Peninsula Division 1 Final as a freshmen and finished third in 2018 behind two seniors, leading Eisenhower to 13th and then 10th-place finishes, respectively. Chang made the Division 1 all-state first team as a freshman and the all-state Dream Team (made up of the best from all divisions) as a sophomore, and she’s won all three tournaments she’s played this fall.

Eisenhower coach Jerry Griesbeck first met Chang when she was in fifth grade, noticing her impressive swing and ball-striking even then. She has a special connection to her favorite golfer to follow – the LPGA’s Megan Khang is a distant cousin and earlier this month played on the U.S. team that finished runner-up for the Solheim Cup. Chang carries a 3.71 grade-point average and is considering studying business or dentistry after she’s completed high school. She has plenty of time to decide, of course, and also has big aspirations on the course before graduating – she’s shooting to become Eisenhower’s first MHSAA Finals individual girls golf champion and aiming to help the Eagles to their first team title.

Coach Jerry Griesbeck said: “While everyone marvels Ariel’s talents on the course, there is another side of her that her teammates admire most. A trait she learned from her family: Never put herself first.  Ariel is one of the biggest cheerleaders on the team, always willing to help a teammate who needs a lift, (offer) a kind word of encouragement to another, or a golf lesson to a couple of others free of charge.” 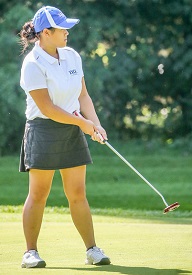 Performance Point: “This time around I didn’t play that great because the last two times I won I shot a 69 and 72,” Chang said. “So for me, my standards, when I play I don’t really play against other people. I play against myself, and I knew that day that I could do better than that. I left a lot of putts out there. But overall at the end of the day I still won, so I can’t be mad at myself. I enjoyed it, especially that my team won also.”

Finals in my sights: “I’ve been practicing really hard, because I got so close the past two years. So I’m going to try to win states – that’s my ultimate goal for this year. I think I’ve worked a lot on my mental (game), and it’s gotten a lot better. Like when I make a bad shot, I think about my next shot and I don’t think about my bad shot before. I play a lot of tournaments, so my mental game, it gets better as I go through the experience. I want the pressure … so I can do better.”

Eagles ready to soar: “I feel like we even got better from last year. Because I know how hard my girls push and that they really, really push themselves, so they know they can do so much better. We’ve been practicing really hard – they voluntarily practice themselves, even outside of the high school practices. They have more confidence in themselves this year. I think that’s why they’re shooting better.”

Epic driving: “My driver this year, it’s been going farther. And whenever I hit … there was this one time, I was playing with this girl and she’s like, ‘Every time you hit your driver, I feel like it goes in slow motion.’ I did get a new driver. I got the (Callaway) Epic Flash. I had the Epic before, the regular one, and I got the new one – I’ve just always loved the Epic.”

Seeing me in Megan: “When she sets up her shot, she’s all focused. But when the shot is done with, she relaxes a bit and she’s more goofy. But when it’s your turn, you get down to business and you focus on your shot. … I’m so proud of her. She’s gotten a long way.”

PHOTOS: (Top) Utica Eisenhower's Ariel Chang watches one of her shots during the Macomb County Tournament on Sept. 11. (Middle) Chang lines up a putt on the way to winning the championship for the third time. (Photos courtesy of C&G Newspapers.)