The Pumfords are a golfing family. While that fact can be seen beyond Freeland High School, it’s very evident there.

Matt Pumford, who played collegiately for Michigan State University from 1994 through 1999, is the Falcons girls golf coach, while his mother Darlene is a volunteer assistant. Matthew’s daughters, Olivia and Grace, entered the season as the team’s 1 and 2, respectively.

But if Freeland is going to meet its goals this season, it’s going to have to do it down a Pumford, as Grace suffered a wrist injury that required surgery and will cause her to miss the rest of the year.

“We started the season really strong -- the first few tournaments went really solid. Even with Grace injured, we were still scoring solid,” Matt Pumford said. “We’re trying to fill that void, and so far the girls have stepped up and scored pretty well. I think that we’re just now starting to play a little better.”

The Falcons are ranked No. 3 in Division 3 and still reaching for their goal of making it back to the MHSAA Finals after a one-year hiatus. In the previous nine years, Freeland had made eight trips to the finals, finishing as high as seventh as a team.

“Freeland has had a solid team for years,” Matt Pumford said. “Last year we were placed in a very difficult region. We had a lot of the top teams in the same region, so even though we played really well, we still didn’t make it through. This year, it seems like the top teams are distributed all throughout the regions. It should be pretty competitive over at Owosso (the site of Freeland’s Regional).” 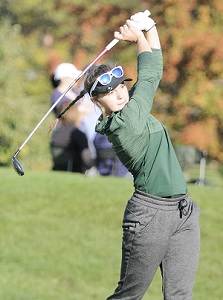 livia Pumford was the lone Falcon to go to qualify for the Finals a year ago, finishing 10th to garner all-state honors. She’s optimistic about her team’s chances to join her at Forest Akers East for this year’s championship event.

“All of our girls are very eager, especially having made it freshman and sophomore year,” Olivia Pumford said. “We have three seniors in our top five, and would love to make it because it’s at MSU this year. I’m really excited to see what we can do in Regionals. We’re just going to keep working hard these next two weeks.”

Her classmates, Lily Beyer and Alyssa Argyle, are also four-year players for the Falcons. Lydia Back, a sophomore, joined a season ago, giving Freeland plenty of experience despite missing Grace.

She’s still plenty missed, however, especially by her sister.

“Right around the very beginning of our season we played in an invite and we were partners for it, and during one of her swings she hit a tree root,” Olivia Pumford said, remember how the injury came about. “She screamed and dropped her club, but she continued to play on it. She had been playing on it for about three weeks. I was pretty sad, because Grace and I have been playing together for a few years. I was looking forward to my last season with her.”

While they may not get to share a high school golf course again, chances are the Pumford sisters will play together again, as the game is such a part of their family.

Their cousin, Nick, played at the University of Michigan and is the head coach of the Oakland University men’s golf team. Another cousin, Dustin, is a senior on the Saginaw Valley State team.

Matt Pumford is the reigning Saginaw District Golf Association champion, a title he has won six times. His older brother Alan, is a six-time winner of the tournament’s senior title.

“There’s videos of me when I was like 2 golfing around the house with those plastic clubs,” Olivia Pumford said. “I’ve always been around him. My dad has 11 siblings, and they all golf. I think I was kind of born into it. … We saw our dad on the range and fell in love with the game watching him. We learned the game from him.”

Grandma’s influence is heavy, too.

“She’s been a tremendous help this year,” Matt Pumford said. “I couldn’t have done it without her, because I started a new job, and she’s really stepped up. It’s been really special to have her coaching with me and coaching her granddaughters, as well.” 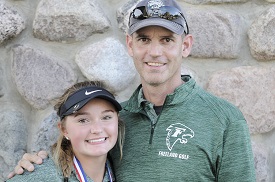 For Olivia, the experience of spending family time on the golf course while she completes her high school career is something she’s savoring.

“It’s something that I think last year I took for granted a little bit,” she said. “I think I put a little too much pressure on myself, but I had a little talk with my dad and he said, ‘I’m your dad first, then your coach.’ I think now this year, it’s hitting me that I have two and a half weeks left, so it’s more of just an enjoyment thing. It’s pretty sad that next year I don’t get him as a coach anymore. But it’s definitely something I’m very proud of -- I have a lot of pride in my family.”

The goal is to make this final season with her family last as long as possible, which means finishing in the top three Oct. 10 in a Regional tournament that also includes top-ranked Flint Powers Catholic.

“We always want to make it to the state tournament, and once we get there, we re-evaluate our goals based on how we’re playing at the time,” Matt Pumford said. “We really just want to go there and compete as well as we can. If we finish fifth, if we finish 10th at states, as long as we play to the best of our ability, I think we can consider that a success.”