By Stephen Anderson
Special to Second Half

But both raised the bar to new heights, including a U.P. Finals record for Rochester.

“Three straight years where we haven’t lost a meet – that’s real impressive,” Houghton girls coach Corey Markham said. “That just shows the quality of golfers these girls are. … They’ve been so consistent. You couldn’t ask for more than that.”

Megan Kelly paced the Gremlins with an 82, while No. 3 golfer Noelle Polakowski tallied an 84 (the next lowest score by a No. 3 golfer was 103), and Bailey Raffaelli, Houghton’s only senior, shot an 88. Even No. 4 golfer Kenna Farrey shot a 93, good for eighth place overall of the 42 counted scores.

“Going three years and not losing a meet, not losing U.P.’s, it’s a huge honor,” Kelly said. “… It gave us a huge advantage this year having it on our home course.” 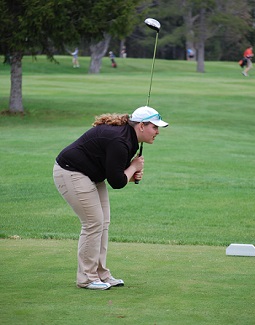 But, even playing at Portage Lake Golf Course, the final result was momentarily in doubt as results slowly trickled in. With all Marquette and Houghton scores posted on the board outside the clubhouse except for Polakowski’s, the Redmen held a slight edge – until her 84 clinched the Gremlins’ win.


But nobody dominated the par-72 course like Rochester, who set a girls’ U.P. Finals record with a 3-under 69 — two strokes better than the top boys’ score, and just one stroke off the girls MHSAA all-Finals record round (68 by Grandville’s Stacy Snider in 1998).

“It was the best round of my life,” said Rochester, whose previous best round was a 76. The previous U.P. Finals record was 79, set in 2011 by Marquette standout and four-time U.P. Finals medalist Carly Saint-Onge. Rochester was medalist in 2012 with an 82.

“My drives were really good, and my approach shots were right on,” said Rochester, who tallied her first career eagle on the par-5 second hole, her fourth hole of the day. “My drive was about 220 yards. Then my second shot I used a 5-hybrid, hit that to about 30 yards from the green, then a soft sand wedge. It hit once and went straight in the cup,” she said. “… That really pumped me up and got me playing better.”

She shot an even-par 36 over her first nine holes with a pair of bogeys being the worst scores of her round.

“When my coach told me she shot a 36, I thought I wouldn’t be able to touch that,” said Kelly, who entered the day as a medalist contender for the host Gremlins. “Then when she got a 33 (on the last nine), that’s amazing. She’s an awesome golfer.”

Rochester nearly tallied a hole in one on the par-3 14th hole, but the golf ball lipped out.

She was the youngest champion in the 86-year history of the Upper Peninsula Ladies Golf Association tournament last July, and she plans to play golf at Columbia College in Missouri this fall.

“It would have been a great way to end my last year winning as a team too, but I couldn’t have asked for more from the girls on my team,” Rochester said.

Marquette coach Ben Smith said his team’s best previous score was about 400, and the team has failed to record a team score in several meets due to having fewer than four golfers.

“The team result, obviously you want to win whenever you go out. But Houghton shot a great score to take home the title,” Smith said. “We did a good job to hang right in there.”

Sophomore Katie Pryor and freshman Sydney Higgins both shot 95s for Marquette, while Hannah Compton rounded out the top four Redmen scores with a 103.

Just as Marquette came together as a team at just the right time, the weather in Houghton shaped up when it mattered. PLGC opened May 14, its latest opening on record, and for Copper Country teams the golf season was shorter than three weeks due to the long winter.

Wednesday temperatures were about 70 degrees with a light breeze under partly
cloudy skies.

Escanaba finished in third place with a 389, led by Kelsey Motto and Jalyn Dagenais’ 92s. Gladstone was fourth with 410 strokes with Callie Jensen tying with Polakowski for third place individually with an 84.

PHOTOS: (Top) Marquette's Avery Rochester watches her drive on the 16th hole at Portage Lake Golf Course. She birdied the par-4 hole to cap her 3-under 69 round, an Upper Peninsula Girls Finals record. (Middle) Houghton's Megan Kelly watches her drive off the 10th tee. She finished second individually with an 82, leading the Gremlins' run to a third straight team title. (Photos by Stephen Anderson.)