So it was only logical that the first-year cooperative program comprised of two schools would be a formidable favorite Thursday at Highland Golf Club.

True to expectation, Cedarville/DeTour fired a 420 to win by 43 strokes.

“I think we have a pretty good team,” said Islanders coach Jeff Autore. “We were defending champions from last year, and the girls played well all year. They worked and practiced hard.

“We’ve done well, and it started with the boys years ago. We’ve always had a good golf program. Once you get a tradition going, it draws players to your program. We also have a good junior high program. We have 14 kids there, too.” 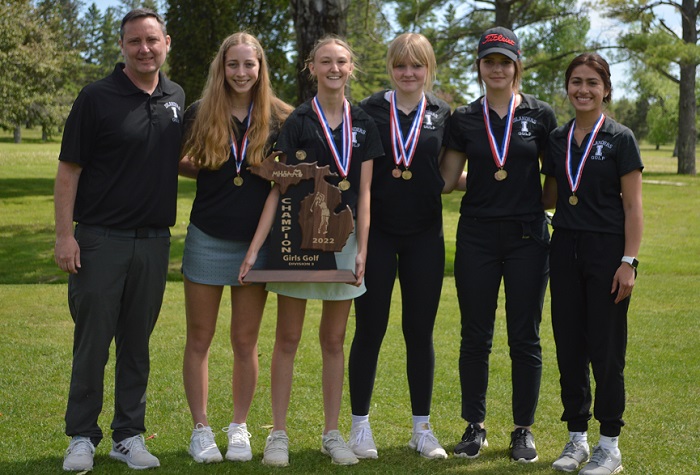 The Ontonagon girls took home the runner-up trophy, with Cooks Big Bay de Noc third. Ontonagon is a regular among the top two Finals finishers, most recently earning championships in 2018 and 2019.

“We’re very pleased with how everything went,” said Ontonagon coach Brady Guilbault. “We knew the Cedarville/DeTour girls would be tough.

“It’s a short season up here. We were waiting for the snow to melt and cold weather to go away. It was hard to get on the course. We were hitting a lot of foam balls in the school.”

“Last year there was no pressure,” said Zoe Autore, who plans to continue her golf career at Albion College. “This year there was more pressure. It got kind of nerve-wracking at times. My drives were a little better today, but the course was wet and muddy. It probably wasn’t the way they wanted it to be. I didn’t get any roll (with the ball) – although it worked out good overall.”

This marked the first full round all year for Snyder, who played with a torn right ACL and will attend Northwest Wisconsin Technical School in Green Bay this fall.

“I just tried my best,” she said. “Even though this my first time golfing a full round this year, I didn’t let that affect me. I just tried to focus on my game and keeping the ball straight.”

Taylor Williams finished fourth individually, and Hayley Kohlman was sixth to round out