LAKE ORION – As someone who is an aspiring broadcast filmer/producer, Moyea Russell is always looking for a great story to tell with a video camera.

For classes during her time at Lake Orion High School, she frequently has been on the sideline at football games with a camera, videotaping the grunts, popping of pads and exuberant celebrations after touchdowns are scored.

While there have been hours of filming done and projects undertaken, Russell said she doesn’t have a favorite one to describe yet.

“I haven’t really developed it that much where I have a favorite,” Russell said. “Hopefully this year I will get a favorite.”

There probably couldn’t be a more perfect subject for Russell to chronicle with a video project than herself.

It would be appropriate given that Russell has been one of the state’s top golfers the past three years and will graduate next summer as the most decorated female golfer in Lake Orion history.

Russell also has a great story to tell off the course because of a family situation at home that is the definition of unique, although beyond rock solid at the same time.

Russell has grown up in Lake Orion with two moms in the house, one being her biological mother, ImSoon, and ImSoon’s sister, Kyoneyi, who is Moyea’s biological aunt and adoptive mother. Moyea was born in Japan. But when Moyea was six months old, Kyoneyi and her American husband, Tony, agreed to adopt her and she was brought to Michigan. ImSoon later joined the family in the U.S.

Tony grew up in Kentucky and has a drawl that is as southern as country music. He has raised Moyea like she has been a daughter, not a biological niece, and Moyea obviously refers to him as “Dad.”

He has been to just about all of her summer tournaments and major high school events on the golf course and is her self-described “agent” in golf, although in a good way. Tony drove Moyea to all her events before she got her driver’s license, helps Moyea update her junior golf profile, flew with her to out-of-state junior tournaments as far away as California and has tried to connect with college coaches the past couple of years during summer events.

Before Moyea’s freshman year at Lake Orion, Tony made sure to introduce her to varsity coach Monty Gallaher and essentially alert the returning players that a talented freshman was coming in to infuse some life into a program that had been dormant in the years following an MHSAA championship in 2007.

Tony has worked in robotics and met Kyoneyi while they both worked for the same company (Kyoneyi as a translator) in Korea for a time period, and they ended up getting married in Korea before moving permanently to the United States in 1994.

Moyea’s biological father lives in Japan and she is friendly with him, talking to him a couple of times a month. She visited him in Japan when she was 14 years old, and Moyea said he plans on flying to Michigan to be a part of her graduation festivities once her senior year ends next May. 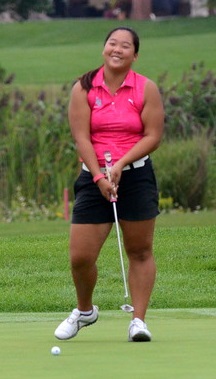 During school, whenever Moyea hears of a classmate who has had a clash with their mothers, she can just kind of laugh and jokingly say, “Tell me about it,” given she has two mothers in the house.

With all sincerity though, Moyea said the situation has worked out beautifully.

“They are basically like a tag-team, so when one mom has an opinion then the other one has the same opinion, so I’ll rely on my Dad,” Russell said facetiously. “But I like it because I get double the love, which is always good for a kid.”

As rare as Russell’s home situation might be, it has nothing on her extraordinary accomplishments on the course and the uncommon turnaround she’s led on her high school team.

Before arriving at Lake Orion, the Dragons had gone years without winning any dual matches since their Lower Peninsula Division 1 title season in spring 2007 and were lucky to avoid finishing last at tournaments.

“In eighth grade, she was going to be the best player on our team,” Gallaher said. “I knew it was going to be promising. The work ethic that the rest of the team got out of it, you can’t measure. She brought that competitive edge to the team.”

During Russell’s first three seasons, Lake Orion qualified for the MHSAA Finals each time, finished as the Division 1 runner-up her sophomore season and won the last two Oakland County titles.

Individually, Russell was the leader after the first day of the MHSAA tournament last year before finishing in a tie for third, and last year won the Oakland County title at Pontiac Country Club with a 68, the lowest score ever at the tournament for a female.

Winning the Oakland County title was no small feat, given two of the state’s other top golfers who also have been impact players since they were freshmen – Veronica Haque of Rochester and Lauren Ingle of Stoney Creek – were in the field.

As a sophomore, Russell was named first team all-state with a 79-stroke tournament average and a 39 average in duals, numbers she bettered last year as a junior.

Named to the all-state Super Team by the Michigan Interscholastic Golf Coaches Association, Russell had a 76.4 tournament average and finished among the top 10 in all 11 tournaments in which she competed.

Gallaher said the strength of Russell’s game is her unmatched power off of the tee.

“Her strength is still driving the ball,” Gallaher said. “She hits the ball 250 (yards) and sometimes 260. She is fairly straight. Most of the golf courses we are playing, she is playing pitching wedges and in. Other girls are hitting longer irons or woods into par-4s. That’s the advantage she has.”

Russell didn’t take up the game until she was 10 years old, but took such a liking to it that in a short time she has worked to become good enough to compete at summer tournaments and become the holder of “all” school records at Lake Orion, according to Gallaher.

“We never pushed her into golf, and she has enjoyed the game,” Tony Russell said. “I still remember watching her beat the club in the ground at the driving range while crying because it wasn’t happening. But she didn’t give up. When she worked with her coaches, she would listen to them and that is how she grew to be where she is.”

Having a pair of mothers at home has seemed to prepare Russell well for this season, because as a senior she is unquestionably the player everyone on her team looks to for guidance. 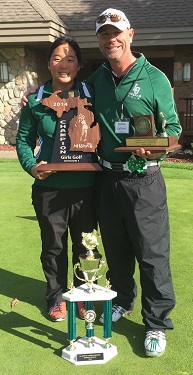 With three of Lake Orion’s top five players gone from last year, Russell is more than just the team leader – she’s the team “mother,” for a lack of a better term.

Next year, Russell will start a college golf career at Southern Illinois University, whose coaches followed her at a tournament in Wisconsin last summer and relayed to Tony how impressed they were with her game.

But what really drew Russell to Southern Illinois was the quality of its broadcast program, and after visiting the campus last summer, the fit was as perfect for golf and academics in person as it seemed from afar.

In college just like in high school, she will get to play golf and pursue great stories to tell visually.

But if Russell’s college career is anything like what she has achieved during high school, there probably won’t be a better story subject than herself.

PHOTOS: (Top) Moyea Russell, third from right, stands with the other top placers after last season's MHSAA Lower Peninsula Division 1 Final at The Meadows at Grand Valley State University. (Middle) Russell enjoys a lighter moment on the green. (Below) Russell and Lake Orion coach Monty Gallaher show off some of the team's hardware earned during the 2014 season. (Photos courtesy of the Russell family.)