YPSILANTI – The future is now for the Saline girls golf team.

The Hornets, ranked No. 3 in the Lower Peninsula Division 1 state poll, do not have a senior among their top four players. It's easy to look ahead to next year with hope and anticipation.

However, coach Debbie Williams-Hoak and her players are not looking past next week, when they will go to Forest Akers East on the campus of Michigan State University as a Regional champion and legitimate threat to win their first MHSAA Finals championship since 2010.

“It would mean the world,” said junior Catherine Loftus, the Regional medalist after shooting 76 on Wednesday at Washtenaw Golf Club in Ypsilanti. “If we could win the state, it would be awesome, and I think we can do it.”

Saline finished sixth in Division 1 a year ago. The Hornets were 12 strokes behind champion Traverse City West, and they graduated their No. 1 player, Samantha Kellstrom. That vaulted Loftus to No. 1, and the transformation was not easy.

Loftus, called “Cat” by her teammates, struggled at first with her new status.

“It was tough for her this summer because she knew that she had big shoes to fill,” Williams-Hoak said. “She put a lot of pressure on herself, and she didn't have the summer that she had hoped for.

“The start of this season was tough, too. She came out and she was trying to be a great leader and shoot the low scores, and it ended up being a lot of pressure. She finally ended up being able to relax and let herself play, and when she started doing that, it was just one great score after another.”

Loftus established a personal 9-hole record of 34 at Brookside Golf Course in Saline, and in the Southeastern Conference tournament at Calderone Farms in Grass Lake she shot a personal-best 73 for 18 holes to win medalist honors.

Loftus shot 84-88 at the MHSAA Final last year, and she expects to do better this month. In the Regional, she showed that she also can overcome a rough start and still finish strong.

“I started off a little bit shaky, but I stayed in there and made some key putts,” she said. “I did have a few three-putts, but my tee ball helped me a lot, too. I wasn't feeling super-great with my swing coming into it, but I figured it out, and I feel much better about it.”
Loftus shot 39-37, and her 76 earned her the Regional title by three strokes.

“Catherine has done a great job as our No. 1 player, and she has really been playing awesome,” Williams-Hoak said.

It is doubtful that anyone challenges the credibility of Williams-Hoak, but if they do, her resume will show them otherwise.

If it's not enough that she was a Hall of Fame track & field performer at the University of Michigan and a six-time performer in the U.S. Olympic Festivals (five in track and one in softball), she also has rich golf credentials. She spent one year on the LPGA Tour and paired with superstar Annika Sorenstam in the 2000 Jamie Farr Classic in Toledo.

But to the Hornets, she is simply Coach Debbie, a leader and mentor who can lay down the law one minute and dance and be “funky” the next. 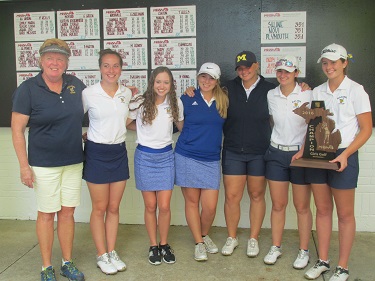 “She's kind of strict,” junior Stephanie Schick said. “She really wants us to do well, and she wants us to work hard, but she has her moments when she gets a little funky sometimes. She can be silly, too, and it's cool to have a Tour player as our coach.”

Williams-Hoak said she doesn't have to lay down the law often with this group, however.

“We have rules, but with these girls it's never a big deal because they adhere to them,” she said. “There's not a whole lot that I do when it comes to being a disciplinarian because they are all so good with it.”

Therefore, Williams is able to relax and have a little fun with her girls.

“We all love Coach Debbie,” junior Sydney Page said. “She has the biggest heart ever. Whenever I hit a good shot, she does a little dance.”

Williams-Hoak does more than a little dance. Last year, she began calling Page “Mini Me,” and the endearing term means a lot to the junior.

“It shows that she cares about me and how much potential that I have,” Page said. “Or maybe it's the hair, and I think it's my personality. I relate a lot to her.”

Williams-Hoak does see a little of herself in her “Mini Me.”

“That started because she had aspirations to try and play on the Tour,” Williams-Hoak said. “We have baby pictures, and we look a lot alike and we think a lot alike. We're similar.”

Junior Molly Pribble said Williams-Hoak has helped her with her mental game and given advice that Pribble can use in her everyday life.

“In the Regional I didn't play my best, and she was calming me down,” Pribble said. “She has this air about her that helps me to calm down and refocus.

“She told me that people in general, when they are sad or upset, they will walk faster or walk slower, or slouch over or stand up straight. She said when you are upset, try not to do those things. She said I walk faster when (I am) upset, so I know to slow down and take my time when I'm upset.”

It is obvious that Saline has some talented golfers, but to a girl they say talent isn't the only reason why they are successful.

“We're all really great friends, and we love each other,” Schick said.

Schick, Page and Loftus all became friends in middle school, and in the ninth grade, Pribble came to Saline. Quickly, they became a foursome.

“Since our freshman year, we've all been super-close,” Page said. “It's cool to know that you have your closest friends there with you, and we have a friendly competition. At the end of the day, you want everybody to do well, but inside, you want to be the best.”

For Pribble, joining the golf team was as much about getting to know some of her new classmates as much as it was the game itself. 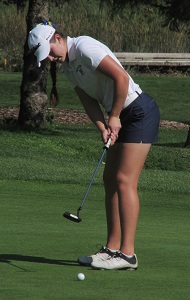 “I joined golf to get to know some girls before school started because in the fall it starts before school begins,” she said. “On our first day of qualifying, Samantha (Kellstrom) and I were the only ones on the range, and she was hitting her drives so well. I was like, 'Oh no, I'm not even going to make the team,' because she was so good, and she was the nicest person ever.”

The player on the team who has shown the most improvement from last year is Schick, who shot a 110 in her one MHSAA Finals round last season, but came back with a 91 in Wednesday’s Regional to tie for 16th. She made the jump with a lot of practice and hard work.

“I played in a bunch of summer tournaments and really got into the groove of things and started to love it more, so I worked really hard,” Schick said.

Schick also works with Rocky Mullendore, the pro at Travis Point Country Club, and previously her coach was Patrick Wilkes-Krier, an assistant coach for the men's golf team at the University of Michigan. She said having multiple coaches has not been a problem.

“My coaches like having multiple opinions on things because they think it helps my swing and they can collaborate with each other about things,” she said.

“She works hard, so if you work hard and allow yourself to do that, you reap the rewards and good things will happen,” she said.

The two seniors on the team are Margaret Wood and Danielle Bunney. On Wednesday, Wood figured into the scoring as the fifth player when Saline and Novi finished in a tie for the Regional championship. The tie-breaker is the fifth-best score on the team, and Wood's 102 beat the Novi player’s by four strokes.

“When I learned that it was up to me, I got nervous, and then afterwards it was a huge feeling of relief and happiness,” she said. “Just knowing that I could contribute in this way was really cool.”

Although Saline has been successful for years, the Regional title has eluded the Hornets recently. Saline was second in four of the previous five Regionals and took third in 2014.

“It feels great to finally get first place, and it is making everything great for my senior year,” Wood said.

One tournament remains, and it is the big one. Nobody wants to think about the potential of next year's team at a time like this, but the promise and potential is hard to overlook, too.

Williams-Hoak looks at it diplomatically.

“I hope they keep the passion going, and depending on what happens this year, either build on that or repeat,” she said. “We have a lot of goals to accomplish this year and next year yet.”