ALLENDALE – A friendly rivalry between two talented sisters helped the Midland Dow girls golf team accomplish a feat this weekend that was four years in the making.

Senior Stephanie Carras and junior Alexis Carras forged a competitive battle for individual honors and propelled the Chargers to a victory at Saturday’s MHSAA Lower Peninsula Division 2 Final at The Meadows at Grand Valley State.

Midland Dow won its first MHSAA girls golf title in school history by firing a two-day total of 645. It defeated runner-up and reigning champion Birmingham Seaholm by a whopping 48 strokes.

Stephanie Carras captured medalist honors with a 139 to outduel her younger sibling by six strokes. Flushing’s Kerrigan Parks was third with a 150.

“It’s a healthy rivalry between us,” said Stephanie Carras, who shot under-par both days with rounds of 69 and 70. “We support each other, and it helps both of us.”

Added Alexis Carras, who shot 76 on Friday before closing with a final round 4-under 69: “We’re always secretly hoping the other one does well too. If we’re close, we start getting on each other. I didn’t know what I was shooting until the last hole when my dad told me. I didn’t know I was beating Steph.”

Both girls tied the school record with their 69s. Stephanie Carras equaled the score of 2009 Finals medalist Kim Dihn earlier in the season and duplicated that number Friday.

“It’s definitely a friendly rivalry between those two, which pushes them and helped us to accomplish as a team what we just did today,” Midland Dow coach Doug Bradford said. “They root for each other, but there is a competitiveness between them. They always want to know where the other one is and how close they are.

“It was a great effort today, and obviously Stephanie and Alexis just played lights out.”

The Chargers had been close in previous seasons with top-5 finishes at the Finals each of the last three seasons.

They finished runner-up a year ago to Birmingham Seaholm, which saw a stretch of three consecutive Division 2 crowns come to an end. 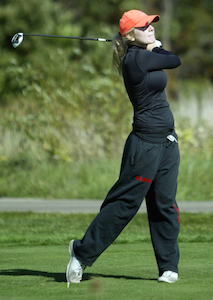 “We quietly talked about it all year,” Bradford said. “We didn’t come out and talk about it every day, but we talked about the goal and the goal was a state championship. We had three goals. Win league, win regionals and then state.

Szabo said team chemistry was the catalyst in her team’s triumph.

“We’re all such good friends, and it is so cool to do it with people you are close with,” she said. “We want to do well for each other, not just ourselves. This is really amazing because we’ve done a ton of things that this program has never done, but we couldn’t do the one we really wanted. This was our ultimate goal, and it’s really amazing.”

Stephanie Carras, who will play golf at the University of Georgia next season, also had motivation from last year.

She finished runner-up for medalist honors, but saved her best for last with solid putting on the greens.

“It’s incredible, and I’m so excited because I’ve never won as an individual,” Stephanie Carras said. “This is big, and yesterday and today my putting was just going well. I feel like that helped me out here. I had the lead going into today, but my coach told me it’s a marathon, not a sprint.”

The Chargers built a commanding 19-stroke lead after the first day.

“We knew we were in good shape, but they still put some pressure on themselves,” Bradford said. “I think they did a great job of finishing, and I’m really proud of them.”

Alexis Carras said she and her teammates took the early advantage in stride and just dedicated themselves to remaining poised.

“Last year was disappointing because we didn’t play well, and we were just really hoping for it this year,” she said. “We just decided to play our games and whatever happens, happens. Just do your best, and that’s what we did. I can’t believe it. This is surreal.”

PHOTOS: (Top) Midland Dow's Stephanie Carras watches one of her shots during Saturday's second round at The Meadows. (Middle) Sister Alexis Carras follows through during her second round. (Click to see more from HighSchoolSportsScene.com.)