EAST LANSING – For the South Lyon girls golf team, it was a first.

For Allison Cui of Okemos, it was number two.

And for all of the competitors Friday at Forest Akers West playing in the Lower Peninsula Division 2 Finals, it was a relief that there simply was a competition in the first place to conclude a season where the Covid-19 pandemic has had school programs, and society in general, on edge.

Last year’s Division 1 champion, Cui, won her second individual Finals title with a 2-under 70 – this time in Division 2 as her team dropped a slot in enrollment. As a freshman in 2018, when Okemos was also in Division 2, Cui tied for first but finished runner-up due to losing a one-hole playoff.

“I’m ecstatic. I really never imagined (two in a row),” Cui said. “I thought there was a chance I could win, but for it to happen, it’s just surreal.”

She said the competition in D2 was just as solid as playing last year in D1.

“I know a lot of the girls (in D2) and played with them over the summer,” Cui added. “They are really strong players, and any other day they could win this easily.”

Cui had a rough start to her day, scoring three consecutive bogies early. But in the middle of her round she carded five birdies over a span of six holes to fight back and then hold the lead. She admitted that made her a little nervous since the Finals this season were cut back from the traditional two-day, two-rounds format, to one 18-hole round to reduce the chances for spreading Covid-19.

“I think I was a little nervous going into it, because this year we don’t have that second day to bounce back if you have a bad first round,” she said. “But I think you have to have the same mentality. I was thinking take it one shot at a time and if you have a bad hole move on from it and make some birdies here and there.”

South Lyon won its first Finals team title in girls golf, after coming so close many times before. The program has won nine straight Regional titles, made 12 consecutive Finals trips and earned two runner-up finishes – last year and in 2014. 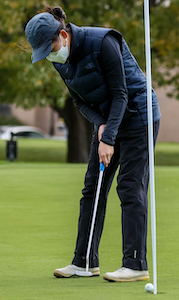 This time, the Lions ended Forest Hills Northern’s three-year hold on the Division 2 championship, shooting 335 to edge the Huskies by three strokes.

“It’s been a long time coming,” said long-time head coach Dan Skatzka. “We were so close so many times, and (with) so many great teams of girls. It wasn’t easy of course. (Forest Hills) Northern didn’t go down without a big battle. We’d be up by eight or nine strokes, then down to three, then back up to seven. As it came right down to the end it was literally like match play for about the last four holes. Someone would lose strokes, then someone else picked them up. Just a great team effort all the way.”

Skatzka wasn’t quite sure if playing just one round versus two was the difference maker in the outcome.

“We really didn’t think about it that way,” he said about not having a second round for a possible comeback scenario. “We looked at it as this is one shot, and we need to be ready from the beginning. We felt pretty good about playing here, and we felt pretty good about having a one-time shot at it. Whether it’s one round or two rounds, you have to put out your best effort from the beginning. The girls were so focused, and the hours and hours of extra putting, especially in these last couple of weeks, using all the putting drills we’ve used all season long. It always comes down to the putting.”

Leading the Lions were senior Katherine Potter at 1-over 73, good for individual runner-up; and reigning individual champ Gabriella Tapp, who finished tied for sixth with an 80. Senior Isabella Campbell tied for 11th.

Tying for third overall were Lilia Henkel of Northern and Olivia Stoll of Haslett.

“I’m just so appreciative to have been able to get this season in,” Skatzka added. “I feel so bad for so many teams that weren’t able to in the spring. We’re very fortunate to have gotten it in and not have any issues all along.”

He also noted that his golfers were focused on keeping to themselves and not getting sick, because they knew the entire season could end if there was Covid-19 detected on the team.

“We had that hanging over us this year in addition to the usual things,” he said, “so I’m very thankful.”