MIDDLEVILLE – The end of last season gave the Middleville Thornapple-Kellogg girls golf team a pretty good idea of what the future might hold.

The Trojans finished runners-up in the Ottawa-Kent Conference Gold, fourth at their Regional and were returning everyone the following season.

“I think it gave them a taste of like, we can do this,” T-K girls golf coach Bob Kaminski said. “They just had to make some improvements.”

The improvements Kaminski felt were necessary to get over the hump came to fruition, and the team made strides in reaching its goals.

The Trojans won the conference title over perennial powerhouse Grand Rapids South Christian and finished third at last week’s Division 2 Regional to qualify for the MHSAA Finals for the first time since 2005.

The conference crown also was their first in 18 years, when they were part of the O-K Blue.

“Last year we played really well,” Kaminski said. “We finished second in the conference and didn’t manage to get through Regionals, but we returned everybody for this year and we just felt like if they worked hard then we could improve and do good things.”

There are eight seniors on the varsity squad, with five among the top six. They’ve played together since middle school.

“We all started in seventh grade, and we all kind of talked about how we were going to be on the golf team together,” senior Anna Kaminski said. “We’ve all been pretty close for years, and so going through the entire high school golf journey together has been awesome. Our bond is pretty strong.”

Other seniors are Clair Jansma, Anna Harmens, Paige Willette and Maddie Shepard. Jansma has been one of the team’s best but did not play in the Regional, making the Trojans’ qualifying for the Finals even more impressive. 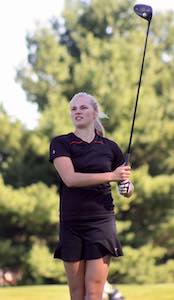 “Obviously, this feels great (to make it to the Finals),” Bob Kaminski said. “Four of the girls who played at Regionals are seniors, and they came onto the team three years ago as freshmen and they just worked hard. They’ve played really well this year and have had a really good season.”

A key factor in the Trojans’ success has been their ability to consistently drop scores.

From last year to this one, a steady decline in each girl’s scoring average has paved the way toward a Finals berth.

“We’ve seen a big jump this year,” Bob Kaminski said. “We actually looked at some stats, and a number of them improved three or four shots from what they were last year. It’s a hard-working group, and they’re always trying to get better.”

Kaminski has embraced the opportunity to coach his daughter, Anna.

“That has been a lot of fun,” he said. “It can be stressful at times because the role of a father and coach are sometimes vastly different, but it’s been enjoyable to watch her play and progress and get better.”

Anna Kaminski said the seniors were motivated to make their mark on the program and end the longstanding drought between Finals appearances.

“We came into the season kind of expecting to do pretty well,” she said. “We knew we had a decent team, and we thought if we could do well in the conference then we should make it to state.”

And Jansma said the team was determined to take the necessary steps to heighten expectations.

"We felt very motivated," she said. "We still wanted to have fun. (But) in the back of our minds, I think we were all looking to win it. We pushed ourselves, and we got the job done.

"It felt so satisfying to work as hard as we did and have it finally pay off. For me, I spent quite a large amount of time working on my short game, and I remember spending hours on the driving range. I was itching to get out on the course with all my teammates."

The Trojans won’t be considered among the favorites this weekend, but that won’t stop them from competing hard to earn the best finish possible.

“I’ve been trying to tell them to have fun and enjoy the experience, but they are a very driven group and they want to do as well as they can,” Bob Kaminski said. “Obviously you’re playing with the best teams in the state, so we don’t know how it is all going to end up. But they want to go there and compete and do the best they can."

Added Anna Kaminski: “I’m not trying to put up a certain score or anything, and I just want to go and have fun. There are a lot of good teams out there, but hopefully we’ll do all right and play our best.”

PHOTOS: (Top) Thornapple-Kellogg’s Anna Kaminski watches an approach shot during competition this fall. (Middle) Junior Paige VanStee has been the team’s low scorer. (Photos courtesy of The Sun and News.)