ALLENDALE – Ignoring the worst actually brought out the best in Alissa Fish.

The Brooklyn Columbia Central senior thumbed her nose at woeful conditions to successfully defend her Lower Peninsula Division 4 girls golf championship Saturday at The Meadows on the Grand Valley State campus. Fish finished with a two-day total of 162 to outdistance runner-up Hillary Ziemba of Jackson Lumen Christi, who finished with a 167.

The brutal weather conditions featured frigid temperatures in the mid-40s, a bone-chilling high wind warning, bouts of thunder and lightning which caused a long delay and even sideways hail.

Not a problem, said Fish, who admitted she's never played in worse conditions after shooting a 5-over par 77 on Friday and an 85 on Saturday.

"It was pretty tough," she said. "You just have to get lost in your shot. If the wind is blowing in your face, you've still got to make the shot. You have to hit the ball like the conditions were normal.

"(Friday) I was satisfied with how I played. The weather was worse today, but I still expected to do better. I won but I left (some shots) out there." 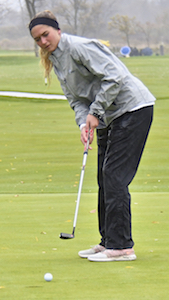 Harbor Springs coach Pete Kelbel agreed with Fish that the conditions were miserable. But his players, including four veterans from last year's club, were able to overcome the wind and rain. They also faced a tough field as North Muskegon returned all five players from last year's fourth-place finisher and was ranked No. 1 in the state. In addition, six of last year's top 10 individual placers returned.

"It was the worst two days weather-wise I've seen," he said. “My hats off to Grand Valley for their work. The course was wonderful, but you couldn't pay people to play today."

Kelbel said the goal of repeating actually began after winning the 2017 tournament. Four of the leading scorers returned this fall, including four-year varsity seniors Callie O'Neill and Madi Bezilla, who tied for eighth this weekend with 175s.

The Rams won seven of 10 tournaments they entered this season, losing only to reigning Division 1 champ Traverse City West and Shepherd.

"It's very hard to repeat, especially when the weather gets like this," Kelbel said. "We knew we had four girls back, so we knew we could be good. We were fortunate to have them back."

Kelbel said battling the conditions was as much mental as physical.

"It was a mental toughness thing," he said. "We have a shorter season, so we're playing when the courses open in the spring."

Fish said she didn't necessarily feel pressure in her bid to win back-to-back titles. Battling the weather was no help, but she said players have to overcome whatever conditions are presented. In addition to the two Division 4 titles, Fish was a three-time conference and Regional champ. Of the team's seven tournaments this season, she won six.

"It's not always about winning; it's about wanting to play well,"' she said. "You have to get lost in the moment. Pressure makes it more fun – I like pressure, that's what I play for. I thrive on pressure."