Stick with it. Work hard. Have faith in yourself, and good things will happen.

The Northville girls golf team has been making good on those promises – and putting it lightly, lots of good things have come their way over the first month of this fall season.

The first MHSAA/Applebee’s Team of the Month for 2018-19 has won all six tournaments it’s played this season, including five in August, while posting incredible scores against elite competition.

That the Mustangs are succeeding isn’t shocking – they did finish fourth at last year’s Lower Peninsula Division 1 Final, and return five of their top six players from that team. But with a quarter century of coaching cross country and now golf, Chris Cronin knows it takes more for a high school team to reach its potential – and why it’s not just by chance that his golfers have tapped into theirs during a blistering start.

“We had 11 girls return from last year’s team. Every one of those girls took it upon themselves to really work,” Cronin said. “They worked on their swing, a lot of them have additional coaches, they played a lot of summer tournaments. They just got themselves in a position to be playing their best golf.”

Northville opened the season shooting a 304 to win the Orangetheory Fitness Invitational at Hudson Mills in Dexter – with sophomore Nicole Whatley shooting a 1-under 71 to tie for individual medalist.

Next up was the Aug. 20 Sentech Services Tournament at Kensington Metropark, and a performance Cronin called “awe-inspiring.” The Mustangs shot a 291, breaking the previous team record of 313 shot last fall, with Whatley leading the way with a 5-under 67.

“I think it was one of those days where as a team they played as good as they could possibly play,” Cronin said. “The reaction from the other players at that tournament, they didn’t have to say much. It was jaw-dropping.” 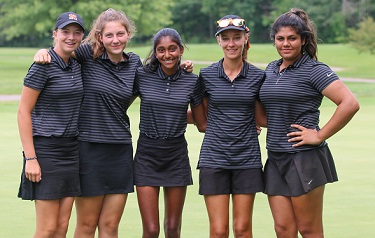 Cronin believes he has the deepest team in the state, and it’s a strong argument. Senior Mariella Simoncini is the lone senior among the "A" lineup, and she missed the individual top 10 at last year’s Final by a stroke. Whatley and sophomore Katelyn Tokarz and juniors Sufna Gill and Sedona Shipka all contributed to last season’s fourth-place finish at The Meadows at Grand Valley State, and freshman Megha Vallabhaneni has played her way into the top group this fall.

The Mustangs took their seventh player to the Saline Invitational, and she finished 24th overall. All of that talent makes for a competitive atmosphere – and raises the level of play for the entire team.

In addition to the team’s 291 round, the latest individual achievement by Simoncini struck Cronin as particularly special so far. She shot a career-best 3-under 67 to lead the Farmington effort last weekend and place first individually, “and as a coach, you always want to see when the hard work pays off. She does so much for us on so many different levels with leadership and setting the tone for the girls, talking them through everything from rules … she’s awesome.”

Surely more highlights are on the way. Northville shot a 306 on Saturday to win the Top 50 Invitational at Battle Creek's Bedford Valley ahead of many of the state's best teams. The Mustangs play in arguably the toughest golf league in the state, and have one more invite at Bloomfield Hills Marian.

Regionals are in a month – kicking off an opportunity to play again for the program’s first MHSAA Finals championship.

“We talk a lot in the program about expectations, but opportunities. And we knew we’d have an opportunity to be good this year,” Cronin said. “If you wanted to be part of that opportunity, it was going to require you to do some work. And they did the work.”

PHOTOS: (Top) Northville’s Mariella Simoncini follows through on a wedge shot during play this fall. (Middle) The Mustangs’ winning lineup from one of its August events, from left: Nicole Whatley, Sedona Shipka, Megha Vallabhaneni, Katelyn Tokarz and Sufna Gill. (Photos by Debbie Stein.)