BRIGHTON – The MHSAA Division 1 girls lacrosse championship will be staying with Rockford for another – and fourth straight – season.

And what’s more, it will be staying in the Vander Molen family for another year as well after a clutch run by middle sister Mekenzie late in the second half of Saturday’s championship game at Brighton.

The sophomore attack scored the tying and go-ahead goals over a minute with just under six to play as the Rams came back after trailing most of the afternoon to down Birmingham United 12-9 in the first MHSAA Final matchup between the two powerhouses.

Senior Alexandra Vander Molen has been one of Rockford’s top players throughout this four-season title run and will continue her career at Ohio State University. But she was mostly left out of the scoring in her final high school game, with Mekenzie netting three goals and freshman sister Karrington adding one to help send oldest sister off with one more win.

“It meant a lot for me to be on the same team as my sister for this last championship for her,” Mekenzie Vander Molen said. “I’ve learned almost everything from my older sister. I’ve learned how to take better shots, better passes, certain things in certain situations.

Birmingham was seeking its first MHSAA title since 2012, and together, the two programs have won nine of the 12 Division 1 championships since girls lacrosse playoffs became MHSAA-sponsored in 2005.

Mekenzie Vander Molen scored her first goal with 11:50 to play in the first half and the Rams trailing 4-0.

The Bulldogs (14-7) dominated off the start and thwarted nearly every attempt Rockford (20-2) made to get back in the game – in large part with the scoring of senior Anna Stachler, whose seven goals tied for second-most in an MHSAA girls lacrosse championship game. 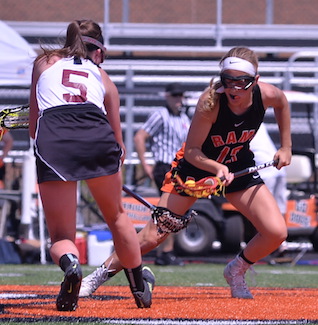 “We threw everything we had at them,” Birmingham coach Jen Dunbar said. “We played hard. They stepped up when they needed to. I can’t pick apart any part of our game. I think we played a great game.”

Rockford drew even for the first time, at 7-7, when Alexandra Vander Molen scored her lone goal with 16:22 to play. Birmingham retook the lead twice on Stachler goals, but Mekenzie Vander Molen's score at 5:46 ended the Bulldogs’ advantage for the last time.

The Rams finished the season on an 11-game winning streak and lost only once to an in-state opponent, by a goal early to East Grand Rapids before later avenging that defeat with a six-goal win.

“Really, it’s just telling the girls to keep their heads in it, and then continue to work,” Rockford coach Mike Emery said of the final comeback. “And we had some other games like that this year. We went down to Illinois and played two really tough teams (Hinsdale Central and New Trier), and we were behind at halftime in both of those and won both of those, and that really helped to prepare us for today, I think.”

Senior Grace Gunneson also had three goals for Rockford, and senior goalie Briana Houle came up with a number of key saves as the Rams became only the sixth team this season to hold Birmingham to fewer than 10 goals.