GRAND LEDGE – Many of the players on the field to start the second half of Saturday’s Division 2 Girls Lacrosse Final had played major roles when Bloomfield Hills Cranbrook Kingswood won its first championship in the sport a year ago.

They weren’t about to settle for less.

The Cranes clutched a one-goal lead with 19 minutes to play, but scored 13 of the next 15 goals to finish with a much more comfortable 18-6 win over Okemos at Grand Ledge High School.

Four of the brightest stars from an accomplished group of eight seniors combined to score 11 of those second-half goals for Cranbrook, which also had finished Division 2 runner-up in 2015 and 2016.

“We had a little pep talk at halftime, which we do, and it really gets everyone pumped. And a lot of us, it was our last game of high school – and the girls who aren’t going to play in college, their last game ever,” Cranbrook senior Isabelle Scane said. “I think they just wanted something special, and I think that’s how we got the rally going. And once you get going, it’s almost impossible to stop.”

Scane – set to continue playing at Northwestern University – scored five goals, including four in the second half. She ended this season with 101 and closed her four-year varsity career with an MHSAA record 461, 185 more goals than the next player on the all-time list. 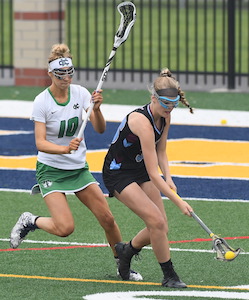 In the end, the Cranes’ 18 goals ranked as the fifth most in MHSAA Finals history – while they gave up what tied for the third fewest all-time.

“It was a matter of giving them a reality check – you don’t get to take this game back. You don’t have another chance at the state championship,” Cranes first-year coach Evan Foulsham said of the halftime chat. “You don’t get to wear the uniform again if you’re a senior.

“It was all a little bit of a heart check in terms of bringing out the passion, and I think it worked.”

Cranbrook finished 17-1-1, its only loss to Rockford, which won the Division 1 championship earlier Saturday.

The Cranes and Chiefs had faced off earlier this season, Cranbrook emerging a 14-10 victor. Okemos (19-4) in its Semifinal had avenged a regular-season loss (and three straight Semifinal defeats) to East Grand Rapids, and was seeking to flip one more past result to close the season.

“I’m so lucky to have played with those girls growing up. I definitely think this year we took it to another level,” Okemos senior Melaina Grewal said. “The (senior) girls taught the younger girls a lot of things about how to push through, how to keep practicing, how to work hard, and this is just proof that you can end up where you want after you work hard – so I’m assuming that the younger girls’ work ethic will continue to be strong.”

VIDEO: Isabelle Scane scores during the closing seconds of the first half.