So far, they are fulfilling that promise.

FHNE has emerged as one of the top teams in the state and hopes to carry that momentum into this year’s postseason.

“After losing to Rockford last year in sudden death, we came back this year wanting it more than ever.” senior all-state defender Daniella Washburn said. “We are all best friends, on and off the field, and most of us have played together for a long time.”

The BirdDogs – Eastern’s mascot is a Hawk, and Northern’s a Huskie – are currently 16-1 on the season and won the outright Ottawa-Kent Conference Tier 1 championship.

FHNE has defeated Rockford twice, by two and then three goals.

The Rams have won eight consecutive Division 1 championships, and defeating them helped give the BirdDogs a mental lift and raised their confidence level.

“Beating Rockford twice was huge for our program, and beating them the first time made us more confident that we could keep up that momentum and play the way we did,” returning all-state performer Alayna Davis said. “It showed when we beat them a second time that we have what it takes. We just have to continue to play like we want it.”

Up until two years ago, Northern and Eastern athletes played with Forest Hills Central as Forest Hills United. But the Rangers split to form their own team beginning with the 2021 season.

This spring, the BirdDogs returned 10 of 12 starters from a year ago, including junior all-state goalie Sommar-Jo Greiser.

“We had high hopes going into the season, and the girls have been determined to do their best every game,” BirdDogs coach Joe Curcuru said. “And so far it’s turned out pretty well. We’ve done very well all-around, but our defense has been very strong this year and we’ve combined that with some timely goals. It’s been a good formula for us so far.”

Davis, a junior, is the team’s leading scorer, but the BirdDogs possess an array of offensive weapons with seniors Carly Wittlinger, Zella Stratbrucker and Tayler Sypien.

The team has scored double-digit goals in all but one game. 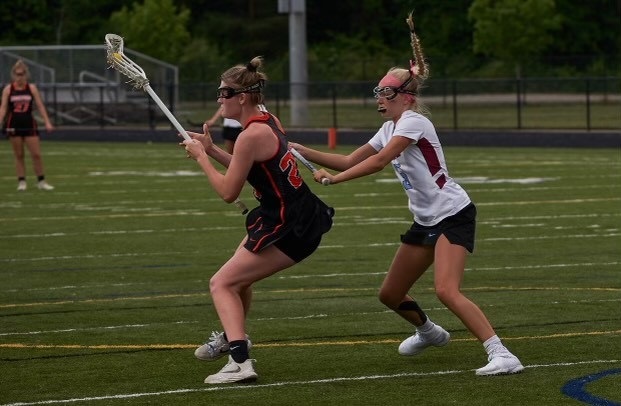 “Having a lot of starters back has been a great benefit because we each know how everyone plays individually, and we have previous chemistry and knowledge from years past,” Davis said. “I think the bond that our team has is what has brought us this far, and it’s only going to keep us rolling.”

Since then, they’ve been perfect, including besting the Pioneers 11-9 in the rematch.

However, Curcuru pointed to the pair of wins over Rockford as catalysts in their current success.

“Rockford has been the gold standard in Division 1 lacrosse, and we’re very proud of our two victories over them,” he said. “Both were close games, and there’s a good chance we will play them again. We’re excited about the position we’ve put ourselves in, and we are very pleased with where we are at.”

With the regular season behind them, the BirdDogs have turned their attention to an anticipated postseason run.

Their potential Regional run begins with a home game Friday against Jenison.

“We are excited to be conference champs, but there is still work to be done,” Washburn said. “We are focused on the playoffs and completing the goal we set for ourselves at the beginning of the season.”

Added Davis: “We are expecting great results in this state tournament, and we are more excited than ever with how our season has been going. We are working hard to keep that momentum going to lead us further.”

Curcuru understands the challenge ahead.

“We know there are some great teams in Division 1,” he said. “It was nice to have a little bit of rest heading into the tournament, and it will be exciting to see where we end up.”

PHOTOS (Top) Forest Hills Northern/Eastern’s Alayna Davis (12) considers her options with the ball during a matchup with Rockford this season. (Middle) Daniella Washburn, right, defends against the Rams. (Photos courtesy of the FHNE girls lacrosse program.)