ROCKFORD – With three minutes to play in Saturday’s MHSAA Division 2 Girls Lacrosse Final, East Grand Rapids’ sideline emptied as subs and late-season call-ups all at once replaced the line-up on the field.

As the first-string group exited, Pioneers fans offered a standing ovation to a group that has become arguably the state’s elite over their four seasons.

East Grand Rapids, ranked No. 1 at the end of the regular season, finished its second-straight MHSAA championship run with a 16-6 win over Livonia Ladywood at Rockford High.

A group of 11 seniors – many who have played together since fifth grade – leave the program after helping accumulate a 78-14 record during their high school careers.

“We’ve learned a lot. Our coaches have been so committed to the program, and we have to thank them for everything and the parents as well,” EGR senior Claire Ludlow said. “The year before last year (2011) was when we really wanted it. We didn’t make it to the state finals, but that was our driving force especially for last year and this year as well.”

The Pioneers improved from 13-6 to 15-6 to 28-0 and now 22-2 over the last four seasons under coach Rich Axtell, and this season’s losses came to teams from Ohio and Illinois. EGR hasn’t lost to an in-state opponent since 2011 – when it fell in double overtime in a Regional Semifinal to eventual Finals champion Grand Rapids Catholic Central.

East Grand Rapids beat GRCC three times this season and finished a combined 8-0 against the next three teams ranked after the Pioneers in Division 2 at the end of the regular season. They also beat six of the top 10 in Division 1, including top-ranked Rockford. 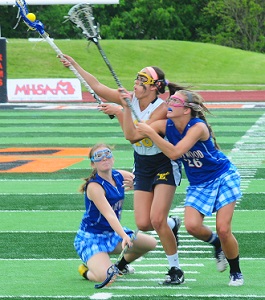 “We made ourselves a tougher schedule ... (and) really challenged the girls this year,” Axtell said. “This was one of those years where we came in with great expectations, and the girls met every single one of them.

“It’s a great way to send off 11 seniors. They’ve had one heck of a career here. They came in when this program was struggling and set a really great standard for the young ladies coming up.”

East Grand Rapids built a 6-0 lead over the first 7 minutes, 32 seconds and led 9-2 at halftime. But Axtell knew the Blazers had come back from an early deficit to beat Bloomfield Hills Cranbrook-Kingswood by a goal in the Semifinal, and he made a point of pointing that out.

“Recently we’ve gotten up and let the other team back in. ... We know (Ladywood) had it in them,” Axtell said. “The girls maintained their focus and basically just kept extending the lead. That sort of composure is something we’ve been preaching to the girls.”

East Grand Rapids indeed did keep a comfortable lead – although Ladywood trailed only 10-6 over the final 42 minutes.

“That’s the type of team I have. They won’t give up. They just want to keep going,” Ladywood coach Kris Sanders said. “If it’s a 10-goal differential, they’re still going to do it, which I like. I’m very proud of that.”

Junior Jessica Snyder scored four goals for Ladywood, which will graduate eight players but should return its top two scorers and three of its top five next spring. The Blazers also set a standard for teams to come – they finished 15-2, and Saturday’s was their first MHSAA Finals appearance in the sport.

Ladywood’s only other loss this season was to Division 1 power Birmingham Marian. The Blazers were ranked No. 8 in Division 2 entering the postseason.

“I couldn’t ask for anything else. If we’re 15-2 and get to the state final and lose the state final, that’s OK,” Sanders said. “We can’t lose sight of all the success we’ve had in the season.”