Lauren Hooker gets up for every lacrosse game. She and her teammates will dress the same for school, send each other pump-up messages throughout the day and carry that momentum into the locker room and onto the field.

But she admits she plays her best against her toughest opponents.

“It’s playing to their level. Playing someone good forces you to step up and play the best,” Hooker said. “It brings the best out of you. I don’t enjoy playing some of the really easy teams as much.”

The East Grand Rapids senior loves a challenge. And she’s helping the Pioneers blaze through a few of them in this, her final high school season, before joining the Marquette University program this fall.

East Grand Rapids has started this season 20-0. The Pioneers are ranked No. 1 both in Division 2 and regardless of division based on the computer rankings supplied by LaxPower.com. And they are doing so with only two seniors – although Hooker, who received a Second Half High 5 this week,  gives the team a star at the top that few teams in Michigan can counter.

Playing attack, she’s scored 101 goals -- already third-most for a single season in the MHSAA record book, and more than 25 percent of her team's total. Add in her 33 assists, and her 134 total points are fifth in MHSAA history for one season. 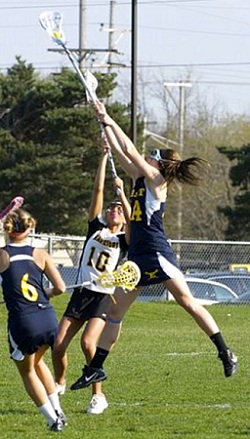 And indeed, she’s been at her best against the best. Hooker had three goals and three assists in an 11-9 win last week over No. 2-ranked Grand Rapids Catholic Central. She scored seven goals in each of two games against Division 1 No. 5 Rockford, and had nine goals in Monday’s 17-8 win over Division 1 No. 2 Hartland.

“She’s what I’d call sneaky quick. Basically, she doesn’t take a big wind-up in her shot; it looks like she’s cradling, looking to pass. And then she just puts it past the goalie,” Pioneers coach Rich Axtell said. “Some players take a different approach, but she’s deceptive. She’s got really good stick control. When she’s in close, she can make you feel pretty slow by comparison.”

Hooker has been on a quest after being part of teams that have lost either in the first or second rounds of Regionals her first three seasons. The last two, the Pioneers ended with defeats by the eventual MHSAA champions. A year ago, they lost 14-13 in double overtime to eventual Finals winner Grand Rapids Catholic Central.

But there’s no question in Axtell's mind that Hooker has brought her game up a level this spring. That effort began in September, when she hit the weight room for training that continued all winter.

Hooker said she started those sessions in part to bring the team together early, especially with so many young players joining the program. Axtell said he thinks part of that drive also came with getting the scholarship to Marquette, which will begin as an NCAA program in 2013.

Hooker first was a golfer, before quitting that sport until taking it up again as a freshman in high school. In the fall, she was the low scorer on the Pioneers golf team that finished eighth at the Division 3 Final, and she missed the individual top 10 by only two strokes.

But lacrosse has been her number one since she first picked up the game during third and fourth grades. “A huge tomboy,” Hooker learned the game from a boy who lived in her neighborhood. After attending a couple of boys clinics, her mom found a girls team for her in the Forest Hills area.

Her mom and group of others then organized an East Grand Rapids youth team that Hooker joined for a few years before jumping up to the Pioneers’ varsity lineup as a freshman.

This offseason she accepted the challenge to set a championship standard. She hopes to leave high school next month having helped the Pioneers win their first MHSAA lacrosse title – with the groundwork for more to come as she moves on.

“I have a lot of hope for the program to continue to do so well,” Hooker said. “Hopefully when I’m gone, people will carry on doing so well.”