ROCKFORD – Playing the final game of her high school lacrosse career, Rockford senior Meghan Datema was determined not to see another team celebrate winning an MHSAA title on her team’s home field.

Datema knew that feeling – but for the second year in a row it was Datema and her teammates who defended their home field and came away with a Division 1 lacrosse title.

Thanks to a strong start and some stingy defense, the Rams won a second straight MHSAA Division 1 lacrosse championship as they defeated Ann Arbor Pioneer 16-7.

“In my sophomore year we lost in the state Semifinals,” Datema said. “The state (Final) was held here at Rockford and it was not a good feeling watching another team win the state title and celebrate on our home field. We were ready this year. We were focused, and we came out ready to play.”

Rockford came out strong on both ends of the field as the Rams jumped to a 5-1 lead.

The two teams came into the match familiar with each other as Rockford edged Pioneer 10-9 earlier this year. So despite an early lead, the Rams knew it would not be an easy task putting the Pioneers away.

Pioneer battled back and cut the Rams’ lead to 5-4 before Datema scored back-to-back goals to give her team a 7-4 advantage.

“We were missing a couple of girls the first time we played them,” Rockford coach Mike Emery said. “It was also the day before spring break, so it was getaway day. We had 22 turnovers that day. Today we had eight. We did a lot better job taking care of the ball and in possession today. Our defense also did a great job today. We didn’t allow them to score for most of the second half.”

Rockford closed the first half up 13-5 after a 5-0 run. The Rams’ defense set the tone and carried the strong play into the second half. 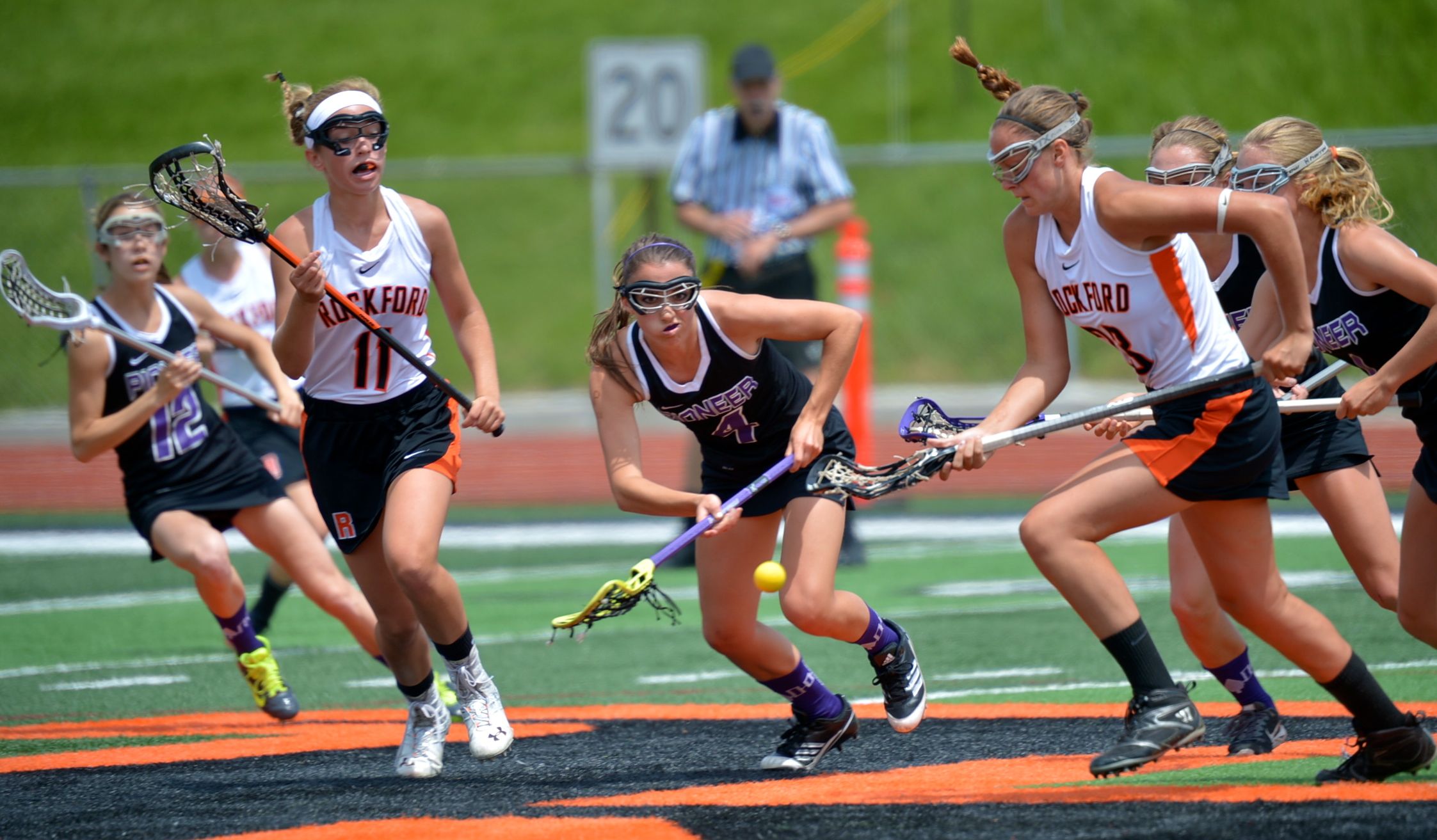 Rockford upped its lead to 15-5 minutes after the break and held Pioneer scoreless until it added a pair of late goals.

“Winning this title was real special,” Rockford senior defender Aimee Hite said. “We lost a lot of defenders throughout the season, so seeing how the defense came together and how strong they played was real exciting. We pretty much held them without a goal the entire second half.”

In goal, the Rams received a solid effort from junior goalkeeper Katie Elwell, who finished the game with nine saves.

“This is just incredible,” Elwell said. “I never thought I would have this experience of winning it two years in a row. You just can’t describe this feeling. I’m so proud of all the players; we all just worked super hard.”

The Rams were paced on offense by Datema, who finished the game with five goals and one assist. Sophomore Alex Vandermolen added four goals.

Datema and Vandermolen have been big offensive producers all season. Datema came into the title game with 58 goals, while Vandermolen entered with 50.

Senior Kyleigh Egnatuk also ended her career in a big way with three goals and an assist.

“We worked very hard this season,” Egnatuk said. “We knew we had to put in a lot of work to get to where we wanted to be. Winning another state title was our main goal. We definitely knew how hard we had to work to do it again.”

Jumping to a lead was a key and something the Rams wanted to accomplish against a team they defeated by just one goal earlier this season.

“I thought today we came out strong and focused,” Egnatuk said. “That showed when we came out and scored those five early goals. I thought in the first game that we played against them we had a lot more turnovers, and that was something we cleaned up today.”

“It was definitely harder,” Egnatuk said. “It felt like we had a big target on our back all season.”

“It was so special to end the season on our home field winning a second state championship,” Datema added. “It was the perfect ending. Both of these state titles have been picture perfect. This one may have been more special because it was the last game of my career.”

PHOTOS: (Top) Rockford’s Alex Vandermolen (11) works to get past Ann Arbor Pioneer’s Mercedes Reyes during the Division 1 Final. (Middle) Rockford and Pioneer players scramble for a loose ball during the Rams’ 16-7 win.