These Rams, led by seniors Brooklyn Neumen and Mekenzie Vander Molen, made their last game perhaps a bit more memorable, setting the MHSAA Finals record for goals in a 25-5 win over Brighton at Grand Ledge High School.

Sophomore Sydney Zimmerman netted her team’s 21st goal with 16:47 to play, that score breaking the record of 20 goals by Okemos in its 2010 Division 2 championship win.

And it was just another accomplishment for a Rockford program that has won six straight Division 1 titles and hasn’t lost to a Michigan opponent since 2016.

“I played with all these girls all though middle school and elementary school; it’s like family, and that’s why I think it’s extra special,” Neumen said. “Everyone on this team, there’s not one person I would say that I wouldn’t love and that I would forget, and I’d love to play with them again if I could. I think it’s kinda sad now that it’s over, but it was a good time.”

The Rams finished 20-2, their only losses to Loyola Academy and New Trier, both of Illinois. Rockford closed with 18 straight victories.

Vander Molen had seven goals and two assists and Neumen scored six and set up two Saturday to both make the list for most goals scored by one player in a Final – Vander Molen’s goals tied for second most. Zimmerman and junior Karrington Vander Molen both added four goals.

Almost more impressive was the defense. Senior Bella VanBuren’s goal 3:45 into the game kept the Bulldogs down just 3-2 – but Rockford gave up only one more score during the first half, and at one point between the end of the first and beginning of the second held Brighton scoreless for more than 17 minutes.

The Rams extended the lead to 10 to start a running clock on a Neumen goal with 12:01 to play in the first half. 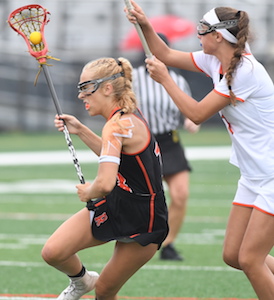 “I feel like everyone on our team has that mindset where we want to win, and we want to win by a lot,” Mekenzie Vander Molen said. “We don’t want to have a close game. We just want to go out there as fast as we can, just so we can get more people goals and just have a fun time.”

She and Neumen are two of nine seniors total who played their final high school game – Vander Molen will continue next season at Ohio State University, and Neumen will play next for North Carolina. Another senior, Maggie Hammer, has been among the team’s leading scorers the last two seasons and added two more goals in this finale.

“Some of these kids have been on four championship teams, some on three. Some it was their first, and each and every one of (our championship teams) is special in their own right,” said Rockford coach Mike Emery, whose record improved to 200-43-6 over 11 seasons with the win. “They all have their own culture and their own characteristics, and we start early trying to develop that, trying to get the best out of these kids.”

Brighton (14-8) intends to be the opponent waiting. The Bulldogs graduate 11 players, but also steered to this championship game despite finishing the regular-season on a 4-4 string and with a coaching change that saw assistant Ashton Peters promoted with three games to go before the playoffs. She led the team to a 6-2 record over the last month.

“The girls rallied around this coaching staff and just were pumped. They knew we could get here, and that was in our gameplan the entire season,” Peters said. “They have become so disciplined and listen so well now, and so that’s what got us here today. There’s not doubt in my mind that my girls deserved to be here.

“Yes, it was a hard game. Rockford has an incredible program. … (But) what we did to get here paid off, because we got here. Once you get here once, you come back again because you have the drive to get here. And so we’re going to come back, and we’re going to win.”

PHOTOS: (Top) Rockford’s Brooklyn Neumen works to get past a Brighton defender during Saturday’s Division 1 Final. (Middle) Mekenzie Vander Molen controls the ball for the Rams.