BRIGHTON – Rockford girls lacrosse coach Mike Emery has built a dynasty in Division 1, and Saturday’s 17-7 championship victory at Brighton High School over Birmingham United made it five straight MHSAA titles for the program.

Get ready for more. The Rams (20-2) dressed just three seniors: Zina Emery, Sisely Vongphasouk, who scored a goal in the second half, and Samantha DeBoer – meaning they’ll be Ram tough again next season.

“All year long it has really been this way,’’ Emery said. “We lost a ton of kids last year and some kids that are making some great strides at local universities and in the Big Ten and other places. We loaded up, and we started eight freshmen and sophomores today. We’ve been dominant all season, and these kids are awesome.’’

Rockford’s Brooklyn Neumen started the scoring with an unassisted goal at the 22:27 mark of the first half.

“We knew that it was going to be very hot, so we made sure that we stayed hydrated,’’ said Neumen. “We wanted to get ahead to start because we wanted to make sure the midfielders had a rest. We executed our gameplan, and I thought that was our best game of the season. We’re a lot younger than last year, but we have a lot of talent. The freshmen and sophomores that have come up play like veterans. It’s fun because we have played with them since elementary school.”

Seconds after Neumen’s goal, teammate Isabelle Holmes made it 2-0 with a blast from in front of the goal. Neumen scored her second goal at the 20:33 mark to make 3-0.

A minute later Karrington VanderMolen scored the Rams’ fourth goal as they began to pull away. 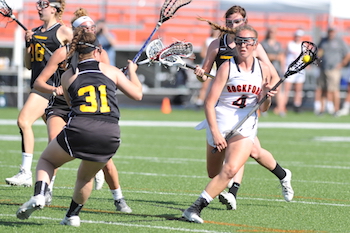 Rockford’s Margaret Hammer made it a four-goal deficit again with her first goal of the game.

“It was Hammer Time, and she came to play,’’ said Emery.

Said Hammer: “We work really hard together, and we support each other and never give up. We have each other’s back and we’re well-bonded. I feel like we’ll be strong next year too.’’

VanderMolen tacked on her second goal to increase the lead to 6-1. Neumen scored her third to make it 7-1, forcing Birmingham coach Jen Dunbar to call a timeout to regroup.

Sydney Zimmerman got in on the scoring to make it 8-1 for the powerful Rams. Feys finally ended the drought for Birmingham with 12:53 left in the half to make it 8-2, but Hammer nailed home her second goal to increase the lead to 9-2.

Hammer made it back-to-back goals to put the eventual winners ahead, 10-2, forcing another timeout by Dunbar.

Mekenzie VanderMolen made it 11-2 with a full 9:10 left in the first half. Hammer’s fourth goal made it 12-2 and started a running clock.

Karrington VanderMolen started the second half with her third goal to make it 13-2. Hammer contributed her fifth, and the rest of the game was just a formality with the running clock and a 12-goal lead.

For good measure, Neumen picked up her fourth goal to make it 15-2.

“I started to get this feeling early in the season when we played East Grand Rapids, and we had a running clock against them and then we played Forest Hills and we got a running clock on them,” she said. “I felt like we could make it to the state championship and win it.’’