The Rams got past Brighton 21-6, following up a similarly dominant 25-5 win over the Bulldogs in the Final a year ago.

Rockford finished 15-5-1, with four of the losses and the tie coming against teams from Illinois and Ohio.

“It’s a ton of fun, and we have great leadership from our seniors,’’ said Rams coach Mike Emery. “We have great youth coming up through the program, and we’ve really built a culture over the last 10 years. That’s eight championships in the last 12 years. We’ve been in the Semifinal game every year, in all 12 years that I’ve coached. We just have way too much fun.’’

The reigning champs wasted no time scoring as Isabelle Holmes found the net 50 seconds into the game to give the Rams a 1-0 lead.

Exactly 60 seconds later, Holmes added her second to get Rockford off to a good start.

Brighton’s first offensive attack led to a score by Sophie Mondro, but seconds later the Rams scored again on a goal by Katie Rodriguez to make it 3-1.

Rodriguez tacked on another at 20:49 to give Rockford a 4-1 advantage.

With Rockford a player short, Cat Kophcia scored to cut the lead to 4-2. But Sydney Zimmerman emerged from the penalty box and scored to make it 5-2 after running down an errant pass. 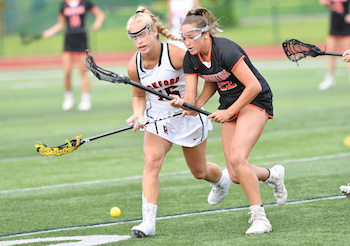 Holmes scored her third goal of the half to increase Rockford’s lead to 6-2 at the 12:34 mark. Chloe Dunham then took a feed from Mackenzie Delacher and found the net to give Rockford a 7-2 lead, and Rodriguez picked up a loose ball and scored her third of the game.

Mondro scored her second and third goals of the game for Brighton to trim the deficit to five.

Mondro then scored her fourth goal for Brighton, but senior standout Karrington Vander Molen finally got on the board for Rockford as the advantage swelled to 11-5. She finished with three goals.

Dunham scored with 10 seconds left in the half to give the Rams a 12-5 lead.

Rodriguez opened the second half with a goal, her fourth, to make it 13-5.

“It’s so fun,’’ said Rodriguez. “The team aspect of it never gets old. We have so much energy. It’s so fun to win it still.”

Vander Molen added her second goal, and the Rams were rolling, 14-5.

McKenna Rinehart gave the Rams a 10-goal lead, which meant a running clock. Delacher added her second goal to put Rockford up 16-5. Zimmerman added her third to make it 17-5.

“I was happy because we didn’t get beat by as many as last year,’’ said Brighton coach Ashton Peters. “We knew it was going to be a tough game. Rockford is a dynasty.”