ROCKFORD – Ryan Skomial and the Brighton girls lacrosse program had experienced nothing but disappointment and heartbreak in their respective, previous MHSAA Finals trips to Rockford over the last 10 years.

That changed for both parties Saturday afternoon. The Skomial-coached Bulldogs exhibited determination in an abrupt momentum swing early in the second half, which ultimately led to elation.

It was the Bulldogs’ fourth straight Finals appearance at Rockford, with the 2020 season canceled because of the COVID-19 pandemic. They lost in Finals to Rockford in the Rams’ home stadium in 2018, 2019 and 2021.

“I saw the lane when Abbey (Burchfield) passed it to me and after I scored, I was like, ‘Oh, my gosh. It’s overtime. This is our chance, and we can win this game now,’” said Boose, whose team finished with a 16-4 record.

“I think at halftime we just said, ‘Who wants it more?’ We knew we could win. We’ve come back from worse, and we knew this was our last game of the season, last half. I think we just gave it all we could.”

Brighton lost its first Finals appearance in 2011 to Rockford, 19-11. The next year, the Bulldogs edged Ann Arbor Pioneer, 17-15 in overtime. Both of those matches were played at Troy Athens.

In 2012, Skomial led Hartland to the Division 1 Final at Rockford, where her team lost to Birmingham United by the same 12-11 overtime score by which her Brighton team was victorious Saturday.

Brighton lost its previous three Finals games against Rockford 25-5 in 2018, 21-6 in 2019 and 19-16 in 2021 – but the Bulldogs appeared to close the gap each time. On Saturday, they got over the hump against the Forest Hills Northern/Eastern co-op team that beat Brighton twice during the regular season, 15-7 and 11-7.

“I played here and lost in double overtime, sudden death, so as soon as that overtime happened, I was like, ‘Ooh, man, we’ve been here before,’” Skomial, a high school All-American, said while she patted her chest in relief. “I knew these girls had something different. I knew that they had the drive and the patience and the mentality to finish this. I’m so proud of them.”

FHNE seemed bound and determined to complete the season sweep against Brighton and capture the big trophy in just its second season as a program. The BirdDogs held a 7-2 lead at halftime and extended it to 8-2 in the first minute of the second half.

Brighton was not playing along anymore, however. The Bulldogs tallied seven of the next eight goals to knot the match at 9 with 10½ minutes remaining.

It was anybody’s game at that point. 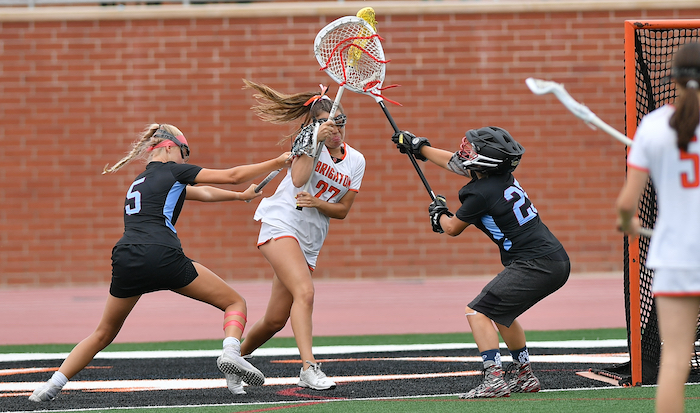 “You know, we made some turnovers, and they got on a run,” said FHNE coach Joe Curcuru, whose squad finished with a 21-2 record. “Lacrosse is a game of runs, and they started scoring some goals and the momentum just shifted.

“We used both of our timeouts in the second half, and we tried to just settle down. But this is an exciting stage, it’s a big stage and we just couldn’t get that momentum back.”

Brighton got on the board first against FHNE on senior Amanda Granader’s tally 1:28 into the contest, but then FHNE went on a goal-scoring barrage with six in a row and seven of the next eight to enjoy a comfortable halftime lead.

Junior Alayna Davis scored 56 seconds into the second half, the third of her co-game-high four goals, to put FHNE up six. Brighton took over from there, however, as Granader scored and added two more in the half in her four-goal performance. Senior Gabriella Mainhardt scored two in a row during the Bulldogs’ surge.

FHNE senior Carly Wittlinger scored her third goal of the night with 2:06 left to put her team ahead 11-10, but Granader tied it with 1:39 remaining.

Skomial called Buckenberger’s performance “remarkable,” classifying her as one of the most talented, naturally-gifted goalies she’s seen. Buckenberger made five saves compared to eight by her FHNE counterpart, junior Sommer Grieser.

“We really just felt like this was our year. We touched the Regional trophies, we’re wearing white, we felt like it was our year and we just really wanted to win,” Buckenberger said. “It starts with the goalie feeling confident, and it just spreads, and if we have the sidelines and the crowd just cheering us on, we’ll have it, too. We just kept saying, ‘One more, one more.’

“I’ve got hives,” she said with a laugh when asked about the excitement of winning the title. “This felt great.”

Skomial said she was proud of the fact that her players never got down on themselves despite the early deficit. The Bulldogs hung in there and wrestled momentum away from the BirdDogs.

Prior to the first overtime period, cheers from the Brighton huddle on the sideline could be easily heard atop the stands on the opposite side of the field. It was more than a rah-rah speech – the Bulldogs believed it was their time.

“It’s definitely amazing. I mean, we’ve been to the state championship the last few years and we’ve lost every year, so to end my senior year like this, it’s a great feeling,” said Boose, who scored three goals in her final high school match. She will continue her academic and lacrosse pursuits at Grand Valley State University.

“This is my favorite team I’ve ever been on. We’re really a family.”