Notre Dame scored 56 points Monday afternoon at Nub’s Nob to cap off one of the most dominant postseason runs possible. The Fighting Irish qualified with a perfect score at their Regional, then won Monday by a landslide. Harbor Springs earned the runner-up nod with 114.5 points, and Petoskey took third with 116.

“Our girls have fought really hard this year,” said an emotional Notre Dame coach Craig McLeod. “We've had a bunch of girls that have really worked hard together.

Within minutes of accepting the champion’s trophy, each member of the team took turns etching her name into the back of it.

Soon the trophy would be a part of history. The Irish have made it to the Finals as a team 16 of the last 17 years and won the Class B-C-D championship in 2006.

Five of Notre Dame’s skiers placed in the top 16 in GS. Kozole led the pack with Delaney Flavin in ninth, Sydney Schulte in 11th, Keely McLeod in 12th and Claire Kirchner in 16th.

“It was really nerve-wracking in the beginning, but once the day got on the nerves wore off,” Kozole said. “It was really exciting to support each other, and we definitely work together as a team. If someone fell, we were like super supportive. We understood that if we wanted to do well, we had to support each other. It wasn't an individual race.” 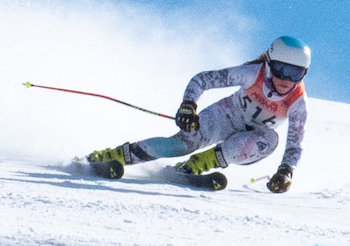 Reagan Olli of Gaylord started off the day with an individual title in the slalom. Olli posted the best time in the first run at 35.41 seconds, then the second-best her second run at 36.95. Megan Paache of Grand Rapids Northview took second.

Olli became the ninth athlete in MHSAA history to become a two-time slalom champion. She won in 2017, her sophomore season, and battled back from a broken wrist during her junior year.

“I've been working on my slalom all year and trying to get back to it,” Olli said.

Paache edged Olli by five hundredths of a second in GS, giving the senior her first Finals title. After starting out fourth with a first run of 25.81, Paache’s second run secured the title. Her 27.09 jumped her from fourth place into first.

A four-year Finals qualifier, she was joined by Northview’s entire team this year. After the races were over, Paache said that’s what made it so special for her.

“It's been a big goal of mine since I was a freshman,” Paache said.  “At some point I wanted to get one. I did it now. That's exciting for me.”

“It feels really great to have them both go home with trophies,” Harbor Springs coach Jane Ramer said.