McLeod, Pontiac Notre Dame Prep and the Fighting Irish girls made it a three-peat Monday afternoon at the MHSAA Division 2 Ski Finals at Boyne Highlands. The third-year ski coach won his third girls championship after helping break the program’s 13-year title hiatus with the first of this string in 2019.

Before winning three Finals titles in a row (and every divisional and Regional meet during those three seasons) Notre Dame Prep had last won a girls Finals championship in 2006.

Teams north of the 45th parallel typically dominate the alpine ski meet, but now downstate teams have claimed four of the last five Division 2 girls titles as Grand Rapids Forest Hills Central won in 2017. Notre Dame was runner-up in 2017 and 2018 before its three-peat began.

“These girls have really worked hard,” McLeod said through tears. “You think about it, they've been putting their ski boots on like six or seven days a week since Thanksgiving. That takes a lot of work and a lot of focus.”

For a school with an enrollment of roughly 635 students, McLeod said 51 athletes (girls and boys combined) on this year's team was impressive. And there’s more to come. Three of Notre Dame’s four all-state finishers Monday are sophomores including slalom champion Sydney Schulte. 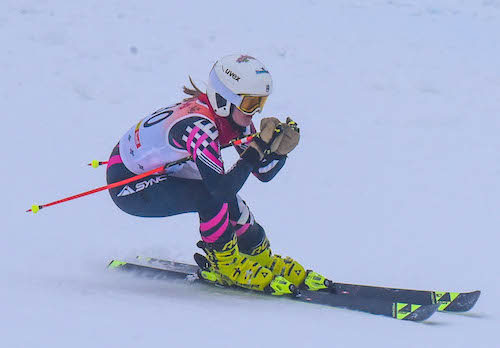 “We're drawn from our JV team and continuing to work and grow with our sophomore team,” McLeod said.

“I just kind of thought about what I was working on in practice and just got rid of all the nerves and just laid it down.”

McLeod said four titles in a row is certainly a big challenge, but he knows his skiers are up for it.

“They are a bunch of great, hard-working young ladies that are really smart, get great grades and do well in every aspect of their life,” McLeod said. “It's fun to be a part of being with them and coaching them and helping them to be better people and create memories they'll have the rest of your life.”

Lowell’s Kaylee Byrne edged out Cadillac freshman Onalee Wallis for the GS title by 13 hundredths of a second after beating her in the Regional meet last week. All medalists in the GS were separated by less than a second, and that list also included fellow Vikings freshman Avery Meyer.

“She’s sneaky fast,” Cadillac coach James Netzley said of Wallis. "It's been a long, long time since we've had a Cadillac girl finish that high … so yeah, that was impressive. That was really impressive."

East Grand Rapids finished team runner-up with 115 points — a newcomer to Finals hardware in skiing. Cadillac tied Petoskey with 130 points for third place in Division 2, beating the Northmen in a tiebreaker because its fifth racer had a better finish. Last year Cadillac finished in sixth place, but the Vikings returned three members of that team.

PHOTOS: (Top) Pontiac Notre Dame Prep’s Sydney Schulte makes her way past a gate during one of her title-winning slalom runs Monday. (Middle) Lowell’s Kaylee Byrne races to the championship in the giant slalom. (Click for more from Sports in Motion.)