Despite a broken left wrist, and cast covering it, Olli won the giant slalom at the Division 2 Regional at Nub’s Nob in a two-run 54.94, and also qualified for Monday’s MHSAA Finals in the slalom in earning the Michigan Army National Guard Performance of the Week.

Olli suffered the wrist injury while racing in Duluth , Minn., a few weeks earlier and she anticipates wearing a cast into early March. But that won’t stop her from attempting to repeat as the Division 2 champion in the slalom, although the wrist has given her a little more pain in that race because competitors cross-block – or make contact with the gates – which they do not in the GS. She finished seventh in the slalom at last week’s Regional in 127.10 and expects to contend in both races Monday at Boyne Mountain. She finished second in the giant slalom at the 2018 Finals.

Olli also is the goalkeeper for Gaylord’s varsity girls soccer team and anticipates being ready to block plenty of shots once that season gets rolling in the spring. She’s considering the possibility of competing in either sport in college after she finishes up high school next year and also carries a GPA above 4.0 that ranked her among the top five students in her graduating class academically heading into this school year. Of course, she has plenty of time to decide, but is interested in the medical field and considering studying to become a physician’s assistant.

Coach Bill Snow said: “I’ve had the privilege of coaching Reagan for three years. Reagan is a dedicated, committed, talented, humble, accomplished, skier. Not only is she a superb skier on the hill, she is an exceptional young adult off the hill. She is also a major asset to the Gaylord High School ski team because she motivates and inspires her peers. During dryland training, when Reagan was a sophomore with a hand injury from soccer, she looked at me and said, ‘I want to be the state champion, and champions need to work hard.’ She accomplished this goal last year at the 2018 state meet when she won the slalom title and placed second in GS. This year she will go into the 2019 state meet with another battle scar, a broken hand, but that won’t stop her one bit! I look forward to watching her effortlessly fly down the hill to another victory.”

Performance Point: “I had broken (the wrist) the Sunday the week before,” Olli said. “So I had tried to get a little bit used to it during the week once I got casted. I just tried to practice, and mostly my goal going into Regionals was just to try to ski clean. I wasn’t really aiming for a win that day. At that point it was still awkward-feeling because normally you’re used to having a lot of wrist motion for pole touching and getting out of the start gate, but that day I just had to go with what I had.”

Big Monday ahead: “I’m a little bit nervous just because I wish I was at full strength. There’s nothing I can do about it now, so I’m going to go forward and try to put my best skiing out there and work with what I have. I don’t know the amount of time it’s been affecting me right now, but as far as skiing itself now, I think I’m still in contention with all of those girls. It’s just a matter of getting my good skiing out. The starts at Boyne Mountain are a bit flatter, which will be tougher, so I’ll have to make up some time.” 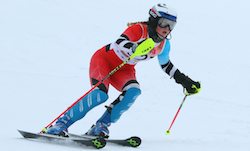 I love it all: “I’ve always been a skier. I started skiing at the little hill in Gaylord when I was probably 2. My mom’s family is big on skiing, so I was always out there. I did a bunch of other sports when I was a kid; skiing has just always been what I wanted to be doing. I worked my way up in different programs, and I got here. … There are so many things I love about it. I love the way it feels going down the hill. It’s so different all the time – there’s not one course ever the same as the other. We’re always on different hills, and you have to adapt and learn to ski different places and in different ways. I love the atmosphere around it as well. You can make so many new friends. It’s a great feeling to be out there skiing … (and) I like the cold.”

Overseas slopes:  “I went to Austria this fall with a group from Traverse City, so I know a lot of girls from TC West and TC Central. It was great. The views out there were incredible, and the hills were a lot steeper, so that was a cool experience. And we were on a T-bar the whole time, so we just got lap after lap and we skied for so many hours.”

Setting up senior year: “I’m more of a go-with-the-flow kinda person. I want to try to do some bigger races in the FIS (International Ski Federation) part of the sport. As far as state and Regionals go, I would like to be back on top and in contention for titles. My goal for senior year, I guess, would be to be healthy, because it definitely helps.”