By Chris Dobrowolski
Special to Second Half

BELLAIRE - Brighton may not have the pedigree of some other schools when it comes to Michigan girls high school downhill skiing.

That perception changed in a hurry on Monday at the MHSAA Division 1 Final at Schuss Mountain.

The Bulldogs finished first in slalom and giant slalom, slipping past Traverse City Central and Traverse City West in a tightly contested top three for their first MHSAA skiing title.

"It's just crazy. It's overwhelming," said Brighton coach Jeff Street. "We worked really hard. We've got a young team - one freshman, three sophomores, a senior and a junior. That's a young team, and we skied really well today. It's a really great group of girls."

Brighton ended the meet with 92 points, with Central scoring 101 and West 103. Marquette's score of 202 put it a distant fourth.

Morgan Myers led Brighton in the giant slalom with a fifth-place finish (50.54), and Veronica Ripper led the Bulldogs in slalom, placing fifth in 1:06.54.

Brighton's win was a bit of a surprise to the teams that were challenging the Bulldogs for the top spot, intra-city rivals that have battled back and forth for supremacy in the Big North Conference and in Regional competition.

"As far as we're concerned, they came out of nowhere because we don't know who they are," said West coach Ed Johnson. "We didn't know they were there, that they were that deep."

"We didn't know about Brighton," said Central coach Jerry Stanek, whose team was the defending champion. "We knew some of their girls from USSA racing, but their top four girls were very good, very consistent." 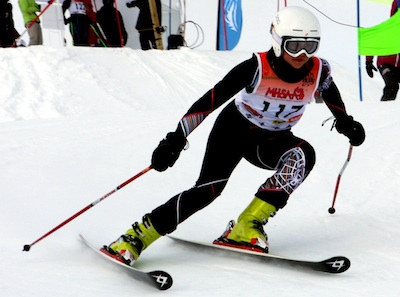 "They didn't make any mistakes today," said Johnson. "We made some mistakes, Central had some mistakes. In a state final, when you've got three teams that are that close or that good, the team that doesn't make mistakes is going to come out on top."

Street was confident his team could hang with the two Traverse City schools, which regularly are in the hunt for the MHSAA title, with one or the other claiming first or second - or both - in each of the last 10 seasons.

"I thought we had a really good chance," he said. "Our motto is focus, balance and integrity. We stayed focused the whole time. As long as the girls know they can win, we're going to be OK. They've got to focus the whole time and not lose it. Don't suddenly turn into Lindsey Vonn and think they're better than they are. Keep the focus."

Brighton held a three-point lead over Central after the slalom (43-46) with West right behind with 52 points. West made up some of its difference by finishing two points behind the Bulldogs in giant slalom (49-51) with Central scoring 55.

Marquette's Gabrielle Gencheff was the top individual skier of the day, winning the titles in both slalom and giant slalom. Gencheff posted a time of 47.52 in giant slalom and a 1:00.51 in slalom.