The Titans occupied four tables near the podium that had all four trophies — for the boys and girls team champions and runners-up — on it all day.

And it also didn't take long for the Titans to get in contention for the top prize.

West had a 14-point cushion after the morning's slalom runs and ended up also winning the giant slalom — but just barely. The Titans edged Traverse City Central 45-46.5 in the GS, and the final standings had West with 80 points to Central's 95.5, with Bloomfield Hills a distant third at 131.

"We started out strong with slalom," West coach Ed Johnson said. "They were a little nervous. They didn't ski to their ability in slalom, but they did what they had to do.

"We knew we were ahead enough of Central that if we held our own in GS, we'd be fine," Johnson added. "Central tends to be a stronger GS team than we are, so we knew it wasn't going to be easy."

Last year's MHSAA Finals saw downstate teams win girls titles in both Division 1 and 2. This time around, the two Traverse City teams easily outdistanced the rest of the competition in Division 1, and the top three squads in Division 2 were from the northern Lower Peninsula.

Titans senior Morgan Culp got to start and end her career with an MHSAA Finals title. The last time the Titans won a championship was her freshman season.

"This was the perfect ending to my senior year," Culp said. "We won Regionals, were Big North champs and won states. That's the best team I've ever been on." 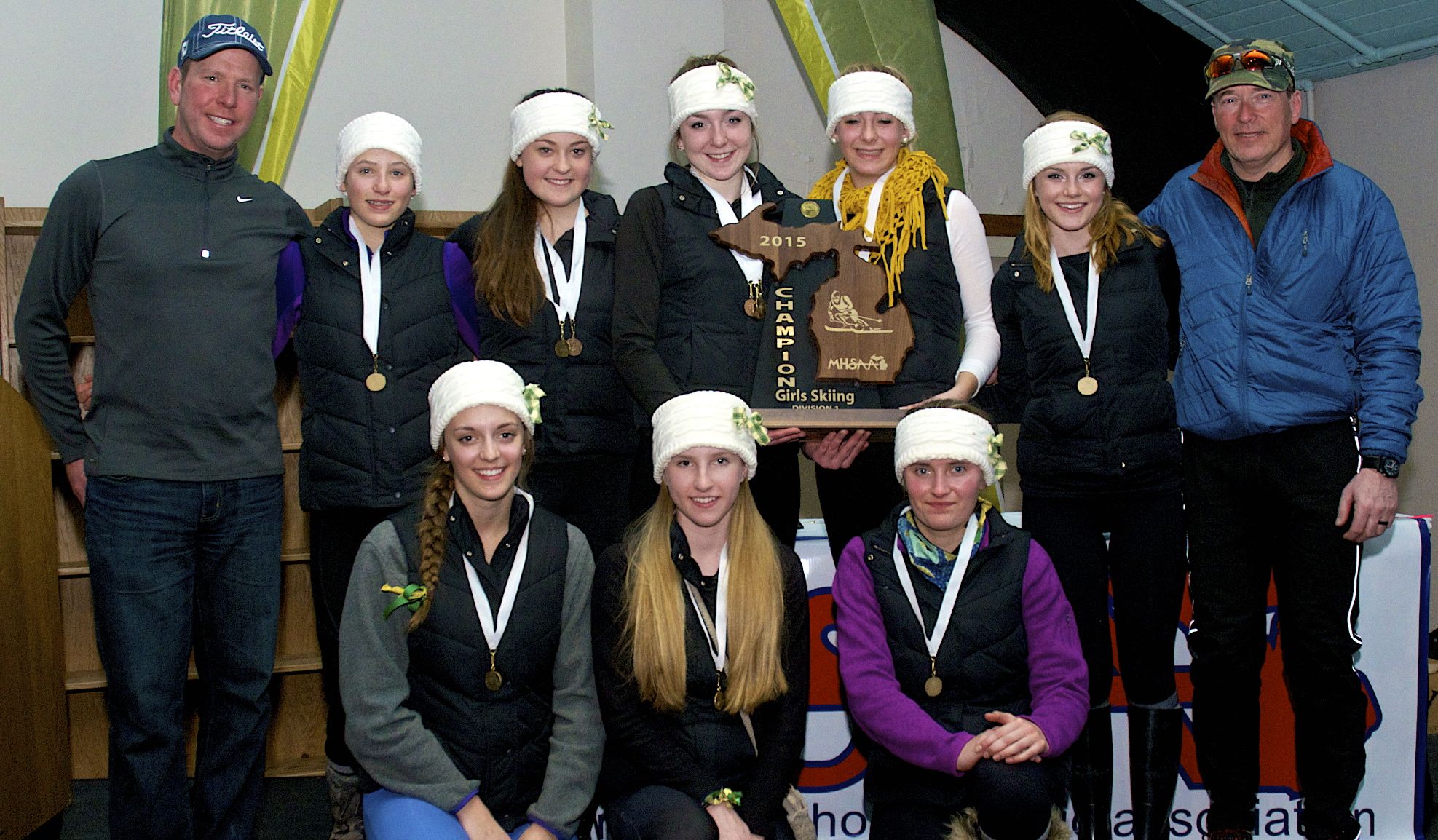 Briana Holden and Courtney Shank are the team's only other seniors. Culp was consistent for the Titans, placing fourth in giant slalom and eighth in slalom.

Freshman Stella Sterling was a big help in winning the GS, stepping up to place 15th as West's third counter behind Culp and junior Claire Podges, who rebounded from a slalom fall to take 13th in GS.

"We all knew about the lead," Podges said. "But we tried to keep it on the down low, so we didn't get too cocky. We held strong."

Podges was eighth in slalom after the first run, but fell on her second and still managed to take 33rd.

"I bobbled a little bit in slalom," Podges said. "But thanks to my team, they upped my spirits and I was able to hold strong in GS."

In slalom, Kitt Hornbogen stepped up in a major way, placing fourth overall with a combined time of 1:11.83.

Many racers had slalom times that were significantly slower on the second run, whereas Hornbogen's was only 1.43 seconds slower on the clock.

"I knew we couldn't get too cocky," said Hornbogen, who added that she prefers steeper hills such as Boyne's Challenger course. "My first run wasn't amazing, but it was OK. My second run felt a lot better."

Central's second-place finish was led by sophomore Maggie Dutmers, who took third in GS and 10th in slalom.

"Maggie Dutmers skied well in both events. It was outstanding," Trojans coach Jerry Stanek said. "We were very inexperienced to start with, and for us to compete the way we did — not just against West, but the other teams that qualified for states — that's huge for the girls. The Traverse City girls are set for the next couple of years."

The Trojans lost their third skier, sophomore Bailey Versluis, to an injury Saturday morning during training at Schuss Mountain. Freshman Katarina Fenton stopped in for Versluis and finished 35th in GS and 33rd in slalom in her first varsity meet.

Brittney Collins was 11th in GS and 19th in slalom.

"West is an outstanding team," Stanek said. "They're an experienced team. They don't have the younger skiers that we do. Hats off to them."

Central, which placed second for the seventh time in eight years, is hoping to move up a spot next year with more experience. Allie Friar was Central's only senior.

"Our girls came through really strong," added Central junior Haley Klein, who was 24th in slalom. "We didn't come into the season with really high expectations, but I think we really raised the bar. I think next year is going to be the year we get it."