“It’s an amazing accomplishment and a credit to the seniors every year for leading us,” said Calvin Christian coach Tim TerHaar, who has chalked up an impressive 256-64-20 record spanning 15 seasons. “We didn’t really talk about it (winning four in a row), but I know it was in the backs of their minds. Our seven seniors did a fabulous job leading us all season, keeping us focused and helping us prepare for each game.”

“I could never have imagined this,” smiled Curry, a senior midfielder. “You dream of playing in one state championship game and maybe winning one. But four? This is incredible.”

Behind one of the state’s top offenses — Calvin Christian entered Saturday outscoring the opposition 137-11 in 24 games — the Squires didn’t waste anytime in lighting up the scoreboard.

Calvin Christian scored in just the third minute when Curry collected a through ball from fellow midfielder VanVliet, beat a defender at the top of the box and chipped in a shot from 10 yards out with 37:56 still to play in the first half.

After being tripped up on the near touch line, VanVliet’s ensuing long, high serve into the penalty box was flicked on by Curry and into the left corner of the goal with 15:22 remaining. That second goal proved to be the game-winner. 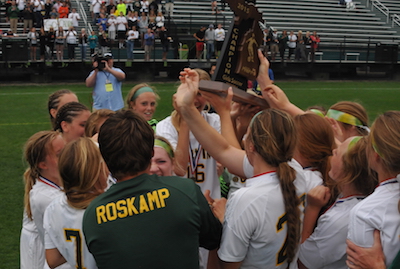 “It is special to score two goals in the finals. But to be honest, it is a team effort. It doesn’t matter who scores,” said Curry, who led the Squires with 30 goals, including a combined six tallies in the Semifinal and Final. “In the back of our minds, we knew we could do this — as a team.”

TerHaar said he never felt safe until the waning seconds.

“The game was played at Lansing Christian’s pace. They are very fast and a lot faster than us,” said TerHaar said. “They gave us a battle. I knew it was going to be a close game.”

It was the second Finals loss for the Pilgrims (20-5-0), the other coming in the 2011 Division 4 championship game, a 2-1 setback to the aforementioned Bishop Foley.

Lansing Christian freshman forward Kasey Jamieson, who entered Saturday with 49 goals, was relatively held in check, although she did ring a shot off the crossbar in the 14th minute and glanced a shot off the outside of the goal post in the 28th minute.

The Pilgrims, who lost in the MHSAA Semifinals last season to Waterford Our Lady, were resilient and kept hanging around the whole 80 minutes.

Lansing Christian senior midfielder Rebecca Hull drilled a penalty kick following a hand ball in the box with 6:10 remaining to trim the deficit to one goal. However, the Pilgrims could not net the equalizer down the stretch.

“My biggest worry coming in, to be honest, was that we were going to give up an early goal,” said Lansing Christian coach Joel Vande Kopple. “With the mentality that they are the three-time defending state champions, and if they get an early goal on us our heads could go down and stay there the rest of the game. Thankfully that didn’t happen. We fought hard (the whole game) and if one of those shots went in, who knows what would have happened. I’m still extremely proud of them with the way that they played and the type of season that they had.”