The Mustangs were seeking their fifth-straight Division 2 title. Instead, the Rangers (20-2-1) ended that streak with their fifth championship and first since winning Division 1 in 2017.

FHC became just the fifth team to hold Marian to fewer than two goals this season, and capped a run during which the Rangers didn’t give up more than one goal in 10 straight games.

“Marian is obviously a top-notched program,’’ Ludtke said. “They have skilled players at every level. We settled into the game, but they definitely were putting some pressure on us. The defense really came together the final part of the season. I was proud of how our backline played too.’’

The Rangers offense was led all season by senior forward Theryn Hallock, daughter of former MSU fullback Ty Hallock, who will attend her father’s school on a basketball scholarship.

Hallock wasted no time making her presence felt Saturday, scoring the first goal on a header at the 35:01 mark to give Central a 1-0 lead. It was her 35th goal of the season. 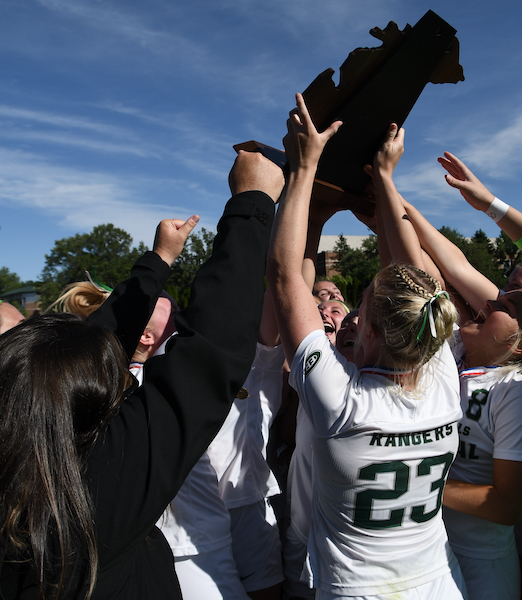 Boxing out like a power forward, she made the Marian defense account for her throughout the championship. Hallock returned to the soccer field this spring for the first time since middle school after focusing on hoops during her first three years at FHC.

“This was a chance for me to come out and play with my friends,’’ said Hallock. “I’ll miss soccer, but I’m ready to get on the court and play.

“We knew our defense had to be solid. We knew we had to get the ball to our forwards because of their speed. We probably could have scored more, but we got the job done. On my goal I just ran to the box, and I knew Dailey Tucker could get me the ball. I was there, I was ready to head it and I had a lot of confidence.’’

After Hallock’s goal, Marian star Isa Agrusso took less than two minutes to tie the game, fighting through two defenders and scoring her 21st goal of the season.

The lead didn’t last long as senior midfielder Stella Sutton scored on a corner kick at the 31:15 mark to give the Rangers a 2-1 advantage.

“We’ve been working on corner kicks ever since postseason started,’’ said Sutton. “I really just wanted to get in there and capitalize on the opportunity. I got my body in there. It hit my shoulder and it just went in. It determined the game. We knew we couldn’t allow another goal.’’

“It was not how we scripted the beginning,” he said. “It was a very wide-open game, and we looked a little shocked at how fast they could counter. I don’t know if the girls were ready for that kind of speed in a live scenario. We hadn’t given up a goal on the corner since the first game of the year. We’ve scored an average of 1.06 goals on restarts per game. To give up one and not score one is the opposite of what we’ve done all year.’’

The Mustangs (17-2) pressed the issue offensively looking for the tying score, but lime green-clad FHC keeper Ava Wilberding was up to the challenge.

Hallock nearly gave the Rangers a 3-1 lead, but a shot that got through came just after the first-half horn sounded.

Forest Hills Central had more chances to take a two-goal lead during the first 20 minutes of the second half, but didn’t convert.

Bloomfield Hills Marian (17-2) was seeking its fifth-straight Division 2 title, but this time for the first time without retired coach Barry Brodsky.

His first Marian championship came in 2003 with co-coach Chris Courage and the opponent Forest Hills Central, with Marian winning 1-0 in overtime.