WILLIAMSTON – Can one save change a soccer season?

It certainly can alter a championship game, as junior Maggie Harma and Richland Gull Lake found out Saturday afternoon in Williamston.

Bloomfield Hills Marian fired 27 shots during the double-overtime MHSAA Division 2 Final. Harma, the keeper, had to save 13.

But the shot she stopped 30 seconds into the 100-minute game might’ve saved the Blue Devils’ first championship run since 1992, one they finished with a 1-0 victory over the reigning champion Mustangs.

“If it had gone in, our team would’ve been down the whole game trying to come back,” Harma said. “Because I saved it, it kinda gave us the little push we needed: We are here, we deserve to be here, we’re not here by luck. We’re here because we’re good, and we can win this.”

Gull Lake (21-1-1) was a Finals regular during the 1990s. But the current players were either still figuring out how to run or maybe even how to walk when the Blue Devils played in their most recent championship game in 1999.

Marian’s story is nearly the opposite. The Mustangs (17-3-4) have won five titles over the last 11 seasons, including three of the last five in Division 2.

Gull Lake second-year coach Jeff Corstange was plenty familiar with his program’s previous success, having graduated from the school in 1996. 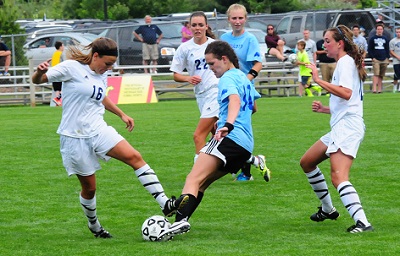 “That’s one of the things when I came into this coaching role two years ago; I knew what it took to get there,” Corstange said. “These girls were young. They didn’t really know what it was. But I wanted to bring excitement back to Gull Lake.

“The whole community supported us tonight, and they get energy off of that.”

Harma admitted her team was a bit intimidated when Marian first arrived Saturday. But Corstange had emphasized to his players that they deserved to be in the Final, and the numbers said the same.

Gull Lake entered the postseason ranked No. 3, just one spot behind Marian. The Blue Devils gave up only eight goals this season – and including Saturday, not one during the MHSAA tournament.

“It starts with their keeper. She’s a really good keeper. And the four in the back are really good,” Marian coach Barry Brodsky said. “Just for whatever reason, we couldn’t get that last little inch it takes to get it into the goal. I thought we were going to get it the first 30 seconds of the game. Sometimes when you don’t get that goal you think you should, that’s the game right there.”

Gull Lake didn’t get its goal until 3:56 into the first overtime. Sophomore forward Amanda Pavletic, who had 15 goals this season although she wasn’t a starter, found the back of the net and sent the Blue Devils’ supporters into a frenzy.

Like it had in a 1-0 overtime Semifinal win over Spring Lake in the Semifinal, Gull Lake’s defense held strong over the final 16 minutes to secure the win.

“We worked really hard in the preseason, and we knew what we were capable of doing this year,” Corstange said. “All that hard work and determination ... this goes to show we can battle with anybody, being a small school. We welcome the battle. We have a lot of talent out there.”