Zach Jonker has had his hands – or, perhaps, feet – on just about every facet of soccer in this state over the last 20 years.

He played on a Class B Semifinalist at Petoskey before graduating in 1995, then earned four letters and served as a captain at Hope College. He came back home to teach social studies and became coach of both boys and girls varsities that are regularly among the northern Lower Peninsula's elite, but also are highly-regarded statewide. And this fall, he began the first of a two-year term as president of the Michigan High School Soccer Coaches Association.

So he can speak first-hand on the benefits of playing high school soccer in Michigan, which is good news to get out perhaps now more than ever. Michigan high school soccer is facing a predicament unlike any it has tackled before – the creation by U.S. Soccer of its Development Academy, a set of travel teams all over the country that train nearly year-round and are meant to eventually fuel the men's national team. That opportunity has drawn a number of top Michigan players out of high school soccer.


Jonker and his coaching brethren are monitoring that situation closely, while continuing to lead their teams into the second half of this fall boys season. His Northmen are 6-7-1 overall this fall, but have faced three of the top-five ranked teams in Division 1 and another from Division 2.

Despite your location near the tip of the Lower Peninsula, you still manage to schedule strong competition. How do you make it work?

We’re in a really nice spot. Traverse City hosts a tournament during the regular season with Traverse City Central, Traverse City West and Petoskey, and then they invite three schools from downstate that have generally been (Warren) DeLaSalle, Clarkston and Ann Arbor Skyline. The following weekend, we host a similar format with Rochester Hills Stoney Creek and Bloomfield Hills Lahser. We get six really good games at the start of the season with two tournaments. It’s early in the season and teams love coming up, making a weekend out of it, hitting the beach and doing some bonding. And the fields at Traverse City and Petoskey are both beautiful, which helps teams commit, plus the three of us are very competitive.

We’re coming down next weekend to play East Lansing, and we always schedule a couple of those. Last year, Mason came up here. It’s definitely a commitment in terms of travel during the course of the year, but from a Petoskey standpoint, I don’t care about our nonleague record. We’re using those games to get better for our league and better for the (MHSAA) tournament. The only tough thing is putting that in perspective for the kids.

What is something happening in high school soccer that the coaches association is proudest about right now?

We’re always looking at it from the other side, what we want to make better. But one of our main goals as an association is to properly recognize players. And I think the process we have in place for giving all-district, all-regional and all-state recognition and ultimately the selection of the Dream Team, I think that’s a very good model that enables us as an association to truly recognize players who put the work in and had a successful season. We also redesigned our web site this past season, and we’ve done a lot of the all-state process online, which a lot of coaches really liked because it cut down travel time for meetings.

Is anything new on the horizon?

A lot of coaches are really interested in seeing what the long-term impact of the (U.S.) Academy ruling is. Everyone’s initial take is we’re seeing increased parity round the state as the result of 120 kids electing not to play high school soccer this year. Obviously, all of those players are good players playing at a high level, and people are interested in seeing at the end of the season if kids are going to have missed playing in front of their communities, and if kids are going to migrate back to high school soccer. There’s talk of U.S. Soccer adding a U-14 academy. They’re trying to expand.

What has been the reaction so far to the U.S. Academy?

For certain players, the academy makes sense. They’re in a professional training environment 10 months out of the year. But those guys not on the professional track would be equally served by playing high school soccer and playing club like we always have. (U.S. Soccer) is doing a lot of this to benefit the top one percent of players. It’s the main frustration from the coaches.

Everyone kind of understands why U.S. Soccer is headed down that path, and it impacted each (high school) team differently. Some programs lost upwards of 8-10 kids as a result. Some didn’t lose any.

In terms of geographic parity, we’re already seeing that. Two years ago, west side teams won all four championships. Last year, Detroit teams won all four. Now we’re going to see more parity within districts, within conferences. And I think we’ll see scores closer than in the past.

What role should high school soccer play compared to club, the academy, etc.?

I equate it as playing for your national team. When you put your school colors on, go out with your friends that you’ve played with since kindergarten, it’s really special. They can’t even begin to match the rivalries we have with high school soccer, the amount of passion that exists within our game and the number of fans that show up at these games. At an academy game, you might have a handful of parents on the sideline, that’s it, and a few college coaches watching. But you can’t match the high school experience and the passion that exists. Kids are going to miss that, and we’ll get kids back because of that.

Do your players see an MHSAA championship differently because so many elite players aren’t participating in high school?

It doesn’t even register with these guys. The (MHSAA) championships are going to be awarded in November, and for whoever wins this year, it will be just as meaningful for these guys as the guys who won last year.

Does soccer get a bump from U.S. national team success like swimming or gymnastics might during Olympic years?

Any time it’s a World Cup year, men’s or women’s, the players get really excited about the experience. It gets them enthused to get out and train. I don’t think kids watch enough soccer in this country, and that’s one of the big issues we have. Ultimately, what’s holding us back at the national team level is kids are not growing up in a culture of soccer on television like in other countries against which we compete. In a World Cup year, kids get excited, and they watch more soccer, and the play is better on the field.

How much has high school soccer changed since you played?

There are just so many more layers of sophistication, tactically. We had good athletes playing at that point, and we have good athletes playing now. But as a country, we’ve evolved from a coaching standpoint. The kids are getting better technical training at a younger age, and are much better tactically. There are many more teams now emphasizing more possession-based (play). What else has helped the evolution is getting off playing on football fields. During the (19)80s and 90s, a lot of games were played on them, and it made it hard to possess the ball when the turf was chewed up. Soccer-specific fields have helped the game evolve.

What will Michigan high school soccer look like five years from now?

I like the path we’re headed down. The number one thing going forward is seeing what happens with the evolution of the academy program – do kids come back, or does the academy program grow? Regardless, the kids playing high school soccer are going to have a great experience, and there are a lot of really good coaches in high school soccer, a lot of really great referees and administrators. That makes the game special. I see us continuing to have the best going forward. 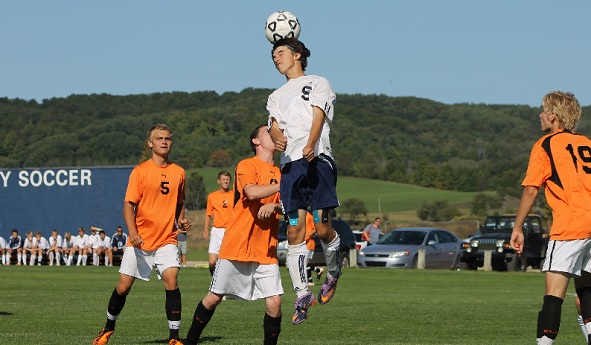 PHOTO: Petoskey senior Noah Honaker goes high while surrounded by defenders to head a ball during a game this season. (Photo courtesy of Dean Viles.)