Shutting down opponents has become the norm for Birch Run and third-year goalkeeper Breckenridge, who had 29 shutouts in goal heading into this season – and has since added 16 more to tie her previous single-season shutout record set in 2015 (she also broke it originally with 13 as a freshman). Birch Run’s 1-0 win over rival Frankenmuth on May 11 was her 11th straight of a since-ended shutout streak and earned her the Michigan National Guard Performance of the Week for May 9-15.

Breckenridge had 12 saves in the win over the Eagles, and to that point Birch Run had outscored its opponents this season 64-1. The Panthers are ranked No. 8 in Division 3 and clinched a second straight Tri-Valley Conference East championship last week with a win over North Branch, after finishing 16-1-3 last year while losing only in their District Final. Birch Run is 17-3 heading into Monday’s game against Otisville-LakeVille.

Kalyn, along with twin sister Kyla and also-junior Madison Enderle, is part of a strong nucleus that should put the team in MHSAA title contention both next month and again next year. Kalyn Breckenridge earned a Division 3 all-state honorable mention last season and also has broken the school’s career shutouts record (formerly 36) this season. She also plays basketball and has played volleyball during her high school career, and carries a 3.5 grade-point average. Although she has another year to decide where, Breckenridge is interested in a career in law enforcement, possibly with the Federal Bureau of Investigation.

Coach Duane Enderle said: "(Shutouts are) always a combination of the team, but what separates her from other goalkeepers is when it comes down to making those critical saves, she's able to step up and make those saves. A lot of goalkeepers, you see great defenses in front of them and great numbers too. But when it comes down to facing the 1 v. 1 quick striker at the high school level, a lot of times they don't make those saves. She's been solid (for three years) but is even progressing to a higher level; she has a very high ceiling."

Performance Point: “I’ve been able to get some action this year more than I did last year, and I feel I’ve just improved throughout my season. Also, my defense and the rest of the team has (improved), and the shutouts have really been a team effort – me doing my job, and also (them doing) theirs. Beating Frankenmuth was a great setup for us. We wanted to win the TVC again this year, win back to back, so it was a special moment for me and the team.”

Have no fear: Breckenridge has played keeper since she was 10. “I also used to be a catcher in softball. I’ve always been hand-eye coordinated. I’ve never been afraid to throw my body out in front of any ball, even if it’s going 30, 40 miles per hour. I’ve always been known to be fearless.” 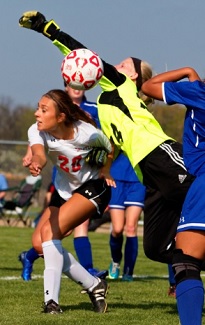 Play them all: “I was introduced (to all my sports) at a really young age. My sister and I always have been very into athletics. We would hate not doing anything at all. We’d usually go from one practice to the next, and we played softball too, so we were playing four sports at a time and we absolutely loved it. We’ve always had a love for sports; TV or something like that has not been interesting for us.”

Sisterly bond: “It’s definitely special. I get to share with her how we did in the game. When we get home I’ll tell my sister how great she did, and she’ll tell me how great I did. We can share wins together. We’ve always been super close. We’ve never been the arguing type of twins.”

Serve and protect: “I’d like to be an FBI agent or some type of police detective. I used to always want to serve my country in some way. I always wanted to help people, and I guess that really pushed me to do something. ... My dad, grandpa, all my uncles have served our country in a way, and that’s made me want to step up and do the same thing.”

PHOTOS: (Top) Birch Run's Kalyn Breckenridge dives to make a stop against Frankenmuth during a 1-0 shutout on May 11. (Middle) Breckenridge goes into traffic to make another stop. (Photos courtesy of the Frankenmuth athletic department.)