WILLIAMSTON – About three weeks ago, Lansing Christian girls soccer coach Joel Vande Kopple said junior goalkeeper Lynn Cullens came to him at practice with what couldn’t have been classified as uplifting words.

“She says, ‘Coach, we are not going to win a state championship with me in goal on penalty kicks,’” Vande Kopple said. “We just kept working with her.”

Fast forward to Saturday’s Division 4 championship game against Kalamazoo Christian, and guess what situation Lansing Christian found itself in?

You guessed it, penalty kicks.

After giving up the tying goal with 3:03 left in overtime, a dejected Lansing Christian team had to regroup and see its goalie face her worst fears in pursuit of an elusive first MHSAA girls soccer title in school history.

But Cullens rose above her shootout fears, making a save and seeing another shot go off of the crossbar.

Thanks to those two failed conversions and four successful ones by Lansing Christian, the Pilgrims finally delivered a long-awaited title with a 2-1 shootout victory.

“It was very nerve-wracking,” Cullens said. “That was the worst spot I could’ve thought of being in, but I just had to trust in God all the way and I did. It ended up pretty well. I had to stop doubting myself.”

After dominating the play during regulation but failing to produce a goal, it looked like Lansing Christian wasn’t going to need a shootout.

With 7:22 left in the first overtime period, sophomore Rilyn Ross beautifully headed home a service into the box by sophomore Jackie Moore to make it 1-0 Lansing Christian.

With Pilgrims fans counting down the minutes in anticipation of the first MHSAA title in program history, Kalamazoo Christian had an answer. 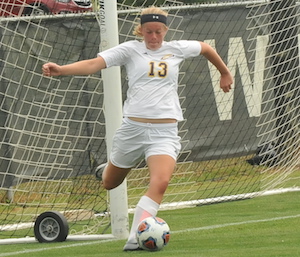 With 3:03 remaining in the second period of overtime, the Comets got an opportunity with a corner kick and sent all 11 players into the box, including senior keeper Allyson Kranstz.

All the commotion in the box paid off, as freshman Lauryn Mohney headed in a perfect service by senior Meagan Laaksonen to tie the game 1-1.

“We had to do something,” Kalamazoo Christian coach Jay Allen said. “My goalie in practice has always wanted to be a forward, so this was her chance.”

Kalamazoo Christian was obviously the much more upbeat team going into the shootout, prompting Vande Kopple to turn into a motivational speaker.

“We wanted to make sure that we were very positive,” Vande Kopple said. “We have been in this position before. We have given up late goals before, and we have always found a way to win.”

Cullens then dove to her left to stop Kalamazoo Christian leading scorer Kayla Beebe to give the Pilgrims an early edge.

Kranstz answered by stopping Lansing Christian leading scorer Kasey Jamieson to start the third round, but the Pilgrims maintained a lead after Kalamazoo Christian hit the crossbar.

Kranstz made 13 saves in goal for the Comets.