Friday surely will be a milestone day to remember for the lone scorer in this season’s MHSAA Division 1 Final – and also for teammates who with her earned the program’s first girls soccer championship, against most expectations.

Stoney Creek entered the postseason ranked No. 10 in Division 1, the same spot it occupied in the first state coaches poll in mid-April and its highest ranking this spring. But it finished No. 1 Friday, with Solek connecting on a penalty kick with just under 11 minutes to play, giving the junior midfielder a little more to celebrate than ice cream and cake.

“Coming into this season, there were a lot of doubts about this team,” Solek said. “I think just because we had 12 seniors graduating last year, that it was just going to be a new team, new players and hard to get the vibe going.

“I think we were all up for the challenge.”

Stoney Creek’s only other MHSAA championship game appearance came in 2005, in Division 2. The Cougars exited last season in the Regional Semifinal with a shootout loss to Grand Blanc, the eventual Division 1 runner-up.

Given that that team graduated five players who earned all-state recognition, and this season’s team brought back only three seniors, it was fair to not expect much more of a run this time.

The Cougars earned their first Regional title since that last championship game run 11 years ago and got to MSU in part by downing No. 2 Utica Eisenhower, No. 4 Novi, No. 7 Utica Ford and No. 14 Troy Athens.

“We just realized that we just have to work our hardest, and then good things will come from that,” Solek said. “Our motto was kinda like, ‘Game by Game,’ and that’s how we took it.” 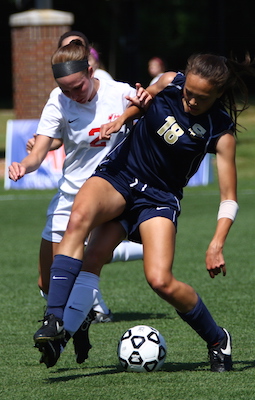 Stoney Creek had 12 shots Friday to Canton’s four, but only four on goal. Canton’s defense gave up only five goals over seven MHSAA postseason games.

But the Cougars kept pressuring the Chiefs on Friday. Three of those shots on goal came during the second half, and Canton senior keeper Jordan Anheuser made an especially impressive set of stops near the 24-minute mark in the second half when she punched away a crossing pass and then slid into the attack to deflect another shot and diffuse a potential rally.

Stoney Creek received the penalty shot after a long pass was launched in front of the Canton net and an attempted header toward the goal drew the foul. Solek punched her deciding kick into the lower right side of the net because “that’s where I go every time on my PKs,” she said.

“Canton did just a great job of winning the ball in the air and getting us out of the zone,” Stoney Creek coach Bryan Mittelstadt said. “We kept trying to push and push and push. (They have) a very strong back line and a very disciplined goalie. We just kept trying to get through the back line, and it was very difficult all day. “

The Chiefs’ run to East Lansing also was considered unexpected, seeing as they weren’t ranked at the end of the regular season after falling in their last two games before the start of tournament play.

But Canton (18-2-4), seeking its first MHSAA title since 2001, made its point by downing top-ranked Grand Rapids Forest Hills Central 2-1 in the Semifinal.

“It’s a disappointing way to end the season, but I am so proud of my team,” Anheuser said. “To not be ranked and go this far, we were definitely the underdog, and I’m proud of everything we accomplished this season. (We’re) still going out on a good note.”